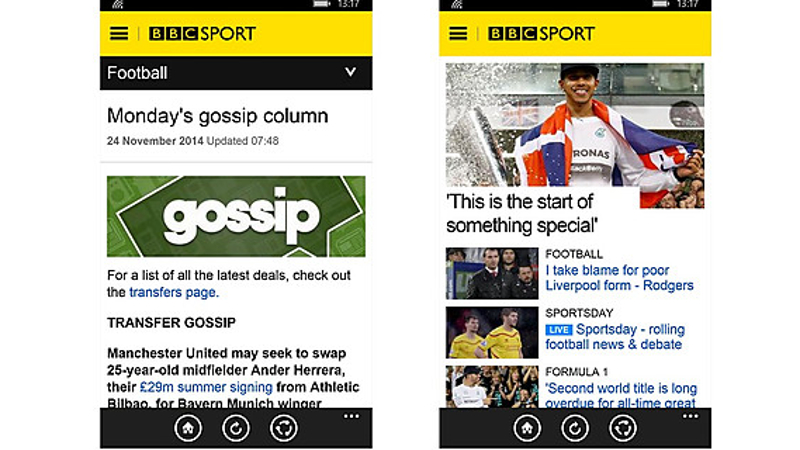 The BBC has finally launched its sport app on Windows Phone, a long, long time after it was introduced on Android and iOS.

Of course, Windows Phone users aren’t exactly unfamiliar with the situation of waiting for an app to arrive, but at least it’s here now for sports fans with Microsoft-powered mobiles. So, what does it offer exactly?

Well, the not so great news about the BBC Sport app on Windows Phone is that it’s pretty basic at launch – and for the moment it simply covers core aspects, namely live sport news and analysis, statistics, tables and results.

The home screen shows top sport stories, and there are sections for UK and global events, along with a Live Tile that displays current sport headlines. You can also share stories with friends.

The Beeb notes that videos aren’t available on the Windows Phone app, and neither are push alerts, although they may be introduced in the future.

On the Beeb’s blog, Ryan Thomas Hewitt noted: “We will monitor app usage and user feedback, alongside other operating systems, and use this to make decisions about additional functionality for the Windows Phone app. As a publicly funded organization the BBC needs to factor in how large an audience can be reached with a particular app.”

And that audience isn’t huge in the case of Windows Phone, although the number of WP users visiting the BBC Sport mobile website is up 54 per cent year-on-year, which is the main reason why this app has now been crafted (in total last month, there were 800,000 Windows Phone users who visited the Beeb’s sport site).

The app works with Windows Phone 8 and 8.1, and you can download it here.