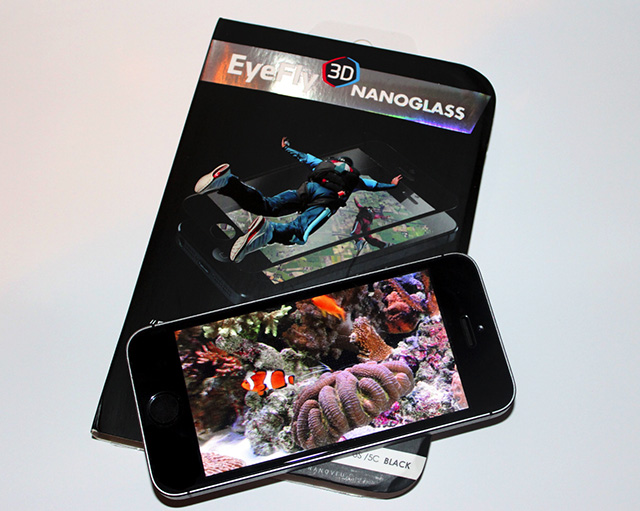 3D movies might not be as popular (or ubiquitous) as they were a few years ago, but people still enjoy viewing media with a degree of depth. The massive success of the Nintendo 3DS is testament to this.

If you own an Apple iPhone, and want to view images or video in 3D (without having to wear special glasses), you now can thanks to EyeFly3D Nanoglass. This is a screen protector that you attach to your iPhone and which delivers a convincing 3D effect.

It works by using a lenticular lens array. Half a million lenses (each less than one-thousandth of a millimeter in size) send separate images to the left and right eyes, which fool your brain into seeing depth of field where there is none. This method doesn’t darken the iPhone screen, and it won’t give you headaches while looking at 3D content either.

Attaching the screen overlay (which is made from 0.5mm thick 9H tempered glass) to your iPhone is very easy, you just remove any existing screen protectors, clean your iPhone’s screen, then peel off the adhesive backing and stick the overlay into position. This can be quite fiddly, truth be told (you need to get the angle exactly right), and bubbles can get trapped under the overlay. If that happens you’ll need to peel it off and try again.

You don’t really notice the overlay once it’s there, although the tiny lenses do make it look as if you can view individual pixels as you could in the earlier pre-Retina iPhones. It takes some getting used to but it’s far from dreadful. The overlay has no impact on the iPhone’s touch sensitivity.

There are two free apps available -- EyeFly3D Vid and EyeFly3D Pix. EyeFly3D Vid lets you watch any of your self-shot videos in 3D, load recommended videos and search YouTube for content. Once a video is playing you can adjust the depth of field using a slider, and also switch between 2D and left and right sources. EyeFly3D Pix lets you turn your own photos into 3D images. The process is actually very simple and just involves marking near, middle and far areas. 3D images can be saved and used as wallpapers. Both apps have a calibration guide, so you can get the screen positioning just right.

It is of course all a bit of a gimmick. You probably won’t be viewing photos or watching videos in 3D on a regular basis, certainly not once the novelty has worn off, but it’s still a neat addition to your phone, especially as the overlay works as an excellent screen protector too.

One Response to EyeFly3D Nanoglass: Convincing 3D on your iPhone -- no silly glasses required [Review]