Microsoft to unveil the next chapter of Windows 10 in January 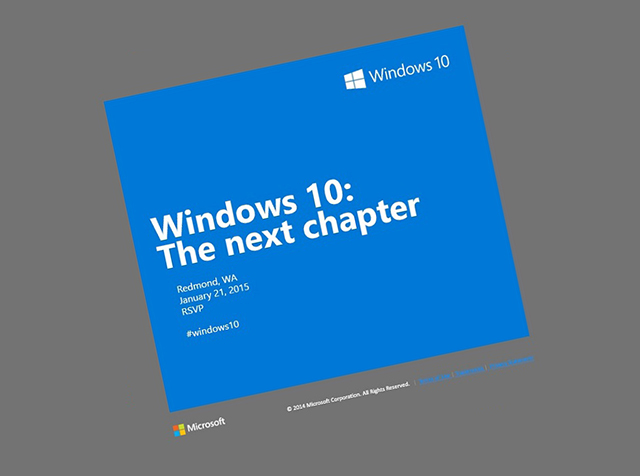 Windows 10 is very much a work in progress. While certain elements of the forthcoming OS appear close to how they will be in the finished release, much of what’s in the Technical Preview is early and very buggy. There’s been talk of the new operating system coming out in Spring 2015, but the latest rumors, based on what Kevin Turner, Chief Operating Officer at Redmond, told the Nikkei news service, a September release is looking a far more realistic prospect. That’s a smart move, as the last thing Microsoft should be doing is rushing out an unfinished OS -- as it did with Windows 8.

You won’t have to wait too long for your next big batch of Windows 10 goodness though, as Microsoft will be holding an event at its Redmond campus on January 21 to talk about the "next chapter" of the OS.

According to Brandon LeBlanc, Senior Marketing Communications Manager on the Marketing Group at Microsoft, the event will include presentations from the Operating Systems Group’s leaders, including Terry Myerson, Joe Belfiore and Phil Spencer, and focus on the Windows 10 consumer experience. There’s no surprise there really, as we’re already expecting a consumer preview to be released around the same time.

There’s a good chance we’ll get to see the OS running on mobile devices too (tablets certainly, smartphones less of a safe bet).

Naturally, Microsoft CEO Satya Nadella will also be on hand to share his thoughts.

The invites are going out, but if you don’t receive one (and it’s a fairly safe bet you won’t) the good news is the event will be webcast and you'll be able to watch it here live.