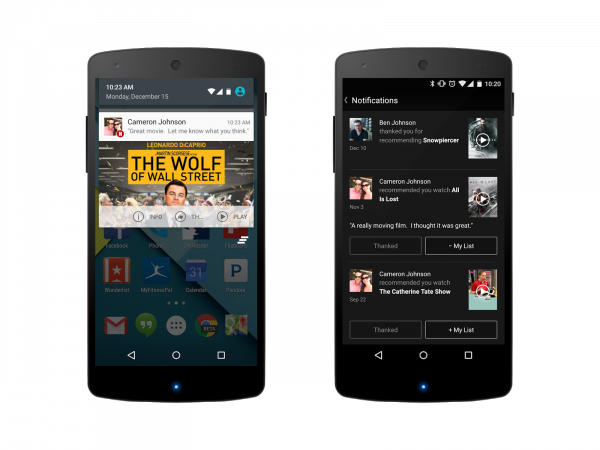 Netflix streaming selection leaves a lot to be desired. With that said, the monthly streaming plan is still one of the best deals in entertainment. Hell, the paltry $8.99 is almost nothing in 2014 dollars -- I spend more at Starbucks in one day on soy chai lattes. What really makes the service attractive, however, is its ubiquity; it can be found on most streaming boxes, game consoles and mobile devices.

Sadly, Netflix sort of dissed Android users earlier this year. How, you ask? Well, it delivered new social features for iOS and game consoles, but left users of Google's mobile OS in the cold. Today, Netflix issues a minor mea culpa, and delivers those features to Android too. But wait, that's not all -- Netflix takes things a step further and introduces Android Wear support! In other words, users of Google's smartwatch platform are getting yet another cool feature to justify their purchase.

"In September, we announced our new Social Recommendation feature for the Netflix website, iPad, iPhone, PS3, Xbox, and many set-top boxes and smart TVs. Today, we're announcing the same feature has been added to the Netflix app for Android phones. Now you can easily, and privately, recommend the shows you love to the people you care about, right from your Android phone", says Cameron Johnson, Director of Product Innovation, Netflix.

Johnson explains, "we've also added a couple of new exciting features specifically for Android users. First, we're taking full advantage of the rich Android push notification capabilities to add images and action buttons that let you to watch, get more info, or thank your friend for a recommendation. Second, for Android smartwatch users, we've created an Android Wear integration that alerts you when you've received a recommendation, and lets you watch, thank, play, or get more details on the show".

As an Android Wear owner myself, this feature excites me -- there is a lack of apps for the platform, but it is growing every day. Netflix is a pretty big player, and its support for Android Wear lends increased credence. Overall, the sharing and recommendation is appreciated, as I often don't know what to watch on the streaming service, and there are many hidden gems.

What Netflix movie or TV shows do you recommend? Tell me in the comments.