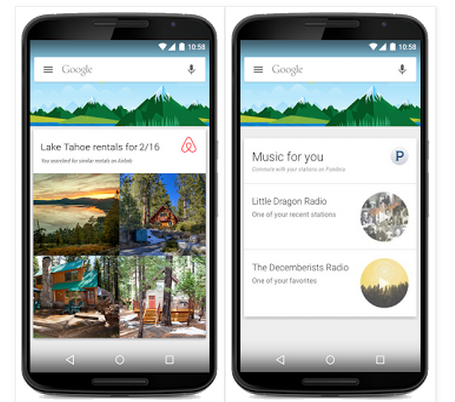 Google has long been devising new ways to boost engagement on its services. In its latest move, the Mountain View-based technology giant updates Google Now, its contextual search trump card, to add support for third-party apps.

In a blog post, the company notes that it has partnered with more than 40 popular apps including Ebay, Pandora, Runtastic, Ford, ICICI Bank, Shazam, and others to feed information from them on to the Google Now dashboard. You can check the full-list of apps and services here.

"Starting today, the Google app on Android can help you keep up with all the good stuff in 40 different apps at a glance -- it'll bring you Now cards to help you out with your day-to-day life, giving you information that's helpful to you, right when you need it", says, Aparna Chennapragada, Director of Product Management at Google's Search team.

Google Now is a handy service that helps users keep up with all the important things happening around them. For instance, it fetches and shows commute-related information such as arrival and departure of a flight from user's email. It also reminds users about birthdays and other events. Other important feeds include weather information, and a list of articles tailored to one's interest.

On Android 4.4 or above, Google Now comes with an option be a part of the home screen. If enabled, the service adds a separate page to the home screen wherein it shows different contextual cards.

As of now, the integration for Google Now is available to a limited set of developers, but Google assures that it will be pushing this feature to all eligible Android users over the coming weeks. The company didn't mention if the service will be available to iOS users.

Are you excited about seeing cards from your bank, music apps and favorite websites on Google Now? Share with us in the comments below.