I was wrong about the smartwatch being a dumb idea 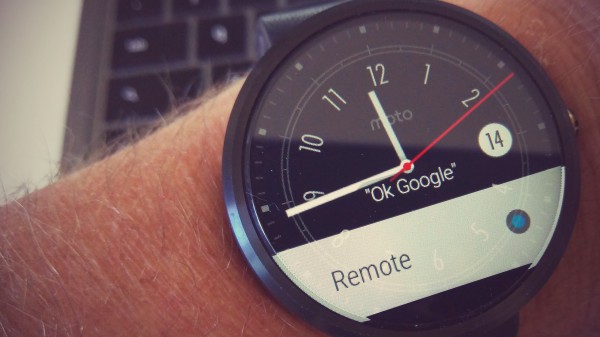 Over the holiday weekend, I started using the Moto 360, which user experience is way better than anticipated. For all the nutcases calling Apple Watch innovative and revolutionary—without there even being a device for them to test—Android Wear is, ah, timely. Google gives great utility that will be difficult for the fruit-logo company to match. Reasons are simple: Context, search, sync, UI design, and Google Now.

I resisted the smartwatch concept for having been there before. Few of the gadget geeks gushing about wearables are old enough to remember Microsoft SPOT. Mid-last decade, the company partnered with real watchmakers (Fossil, Suunto, and Swatch); the devices were as much jewelry as functional timepieces; FM radio delivered appointments, news, weather, and other alerts independent of cell phones; and battery life lasted three days or more (which wasn't enough). By these measures, SPOT watches were so much more and still failed. Hence, these are reasons why in past analyses I called the decade-later attempt dumb. But I was wrong.

Android Wear demonstrates why there is a market for smartwatches. Whether or not Apple will be worthy is the $6 billion question. Much depends upon the company's capability to get right context, search, and sync—they're part of Google's corporate cultural DNA and functional attributes still quirky in iOS and supporting services like iCloud.

As I have repeatedly asserted: There is no post-PC era. Welcome to the contextual cloud computing epoch, where what matters most to you is stored on remote Internet servers and made available anytime, anywhere, and on anything. That's what I mean by context. What you need changes based on situation, or location. Google's core competency is context—that's what search is all about—and sync. Apple Watch can't just be pretty. Context, search, and sync must be core benefits.

As the Google search agreement expiration approaches for Safari, I don't see how Apple cannot go elsewhere. Siri already uses Bing, which watch default destination seems almost predestined. What? Will Google really provide better contextual framework for iOS than Android Wear? The relationship between the two companies is too icy and competition too great. Strange that Apple's one-time archenemy would be better partner. Problem: Neither Apple nor Microsoft gives as good context, search, or sync today as Google.

If, and that's an unlikely if, Android Wear device support came to iOS, Google might just route Apple Watch. The search and information giant provides broader range of contextual services—where and when you want them—than any other company. The remaining subheads explain how in, ah, context of Android Wear watches.

In considering smartwatch's place is the lexicon of personal devices, my early analysis focused too much on Microsoft's past failure, smartphone dependence, redundancy, and short battery life. So far, using Moto 360, none of these factors present problems that overwhelm other benefits. Stated differently: I underestimated Google's contextual design capabilities.

Battery life was by far the biggest concern. Consumers that wear watches don't charge them. They're wear and forget. That's learned, familiar behavior. I have charged Moto 360 three times since Friday: Out of the box that evening, again about a day later, and this morning. I see 24 hours or more use, which is much better than anticipated. Meanwhile, recharging is fast.

My plan is charge like I did today: Not overnight, as I have read in many end-user reviews or forum posts. The most sensible time is when I get out of bed to clean up for the day. I will eventually take off the watch to shower anyway. So why not put the device into the wireless charging dock early day; let it get ready while I do. If there is some need to work immediately at the computer, Moto 360 is a timekeeping assistant while juicing up.

Redundancy and smartphone dependence also made me skiddish. Many people don't wear watches because their handsets provide the time. Meanwhile, smartwatch and phone duplicate many functions. Why use two devices to accomplish single tasks? Surely the wristwear is redundant. But my expected experience isn't. Context is the reason.

Almost immediately, I could see the benefits of using Android Wear and Moto 360, without ever looking at a manual (there is none beyond flimsy fold-out instructions). I don't always carry smartphone or can easily get it out. Washing dishes the other night, I could see my sister calling from the watch. My mom was hospitalized over the weekend. I wouldn't have heard the phone two rooms away over the running water. Later, while sis and I talked, a text message from my daughter popped up on Moto 360. I would have missed it otherwise.

There are plenty of circumstances where I wouldn't take out my smartphone—phablet, really, as I use the Nexus 6: Car and bicycle and sometimes walking. That I can flip my wrist and see a text message, email, or other notification is damn convenient. In the car, at a stoplight, I can quickly dictate a text reply or even set a reminder. Haven't you ever had some brilliant idea while driving only to forget it later? No longer.

Other examples are boundless, which for less than three days use surprise the hell out of me. Google Now is essential element to the benefits equation, and Apple offers nothing comparable. The concept is simple, and in some ways creepy: The search giant prompts with information before you ask, based on context, location, and past behavior. Now is contextually relevant on an Android Wear watch paired to a smartphone.

It's extremely convenient when out biking or walking to stop, say "OK, Google" and ask for a nearby restaurant, which the watch displays, with reviews, business hours on that day, and directions from my location should I want them. That's context, extended by search and supporting services like location and mapping.

Contextually, I rely more on Nexus 6 more than my Fujifilm X100T as camera. Using Moto 360 as remote is cool and convenient, although often unnecessary. But for those people looking to pose the perfect selfie or group shot, there's utility. I could gush on, but the point should be obvious enough about the many contextual benefits.

The best devices change your behavior, improving your lifestyle by taking what's familiar and extending it with new benefits. That's my contextual experience using Moto 360 as a companion to my big-ass phablet and major reason for confession: I was wrong about the smartwatch being a dumb idea.