I'm a fat guy and I bought the Microsoft Band wearable -- Can it save my life? 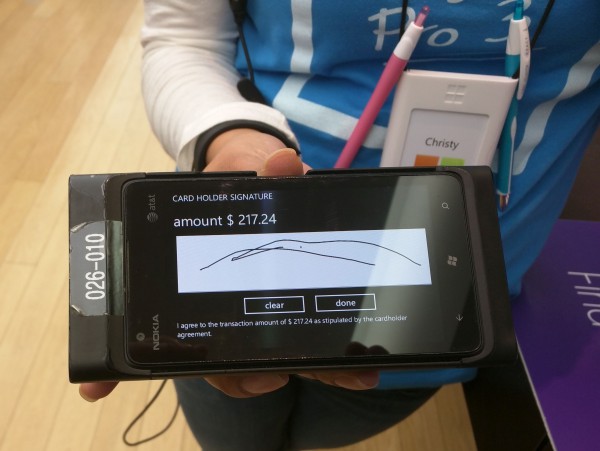 Yesterday, my colleague Manish wrote about Microsoft's "desperation" with its Band fitness wearable. While I disagree with his sentiment about the promotion -- I do not think it is a desperate move -- I was intrigued by the free Starbucks gift cards. Since I was heading to the mall anyway, I decided to go to the Microsoft store under the guise of actually wanting the Band, even though I didn't, so I could get free gift cards. Hell, I even told my wife to try one on so we could get two cards!

Something crazy happened while I was there -- I bought one. Microsoft's promotion was a success. They got me into the store, and I ended up getting hooked. The salesperson, Christy, was very high on it, and when she showed me all of the features, I just had to have one. Truth be told, I am very much out of shape, and I really want to lose weight and be healthy -- I'm scared of dying. After many unsuccessful attempts to drop pounds, I am hoping the Microsoft Band will help me to be successful. In other words, I am depending on the wearable to help save my life.

No, I'm not in imminent danger of dropping dead (at least I hope), but obesity is a killer in itself, and I have certain ailments that stem from being overweight. Please know that when I say "save my life", I do not only mean in the literal sense, but socially too; there is a stigma with being fat. Before I get into my health though, I want to talk about my Microsoft Store experience.

I visited the location closest to me, at the Walt Whittman mall. Once in the store, I saw people checking out the Xbox, laptops, tablets and even Windows Phone. It wasn't very busy, but unlike the Apple Store, Microsoft's visitors seemed interested in actually buying, rather than just playing around to waste time. The Band was being heavily promoted, both inside the store and outside. 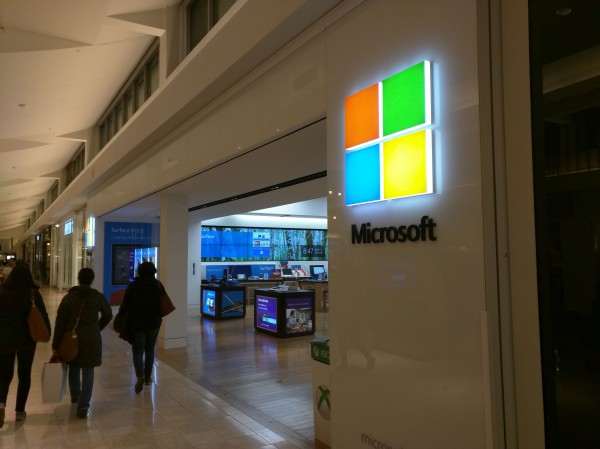 My eyes surveyed the store for a salesperson, and I found one named Christy that was free. I told her that I understood there was a Starbucks promotion for trying on the Band, and that my wife and I wanted to try it. Again, I had no plans to buy it, I simply wanted free Soy Chai lattes from that coffee shop. 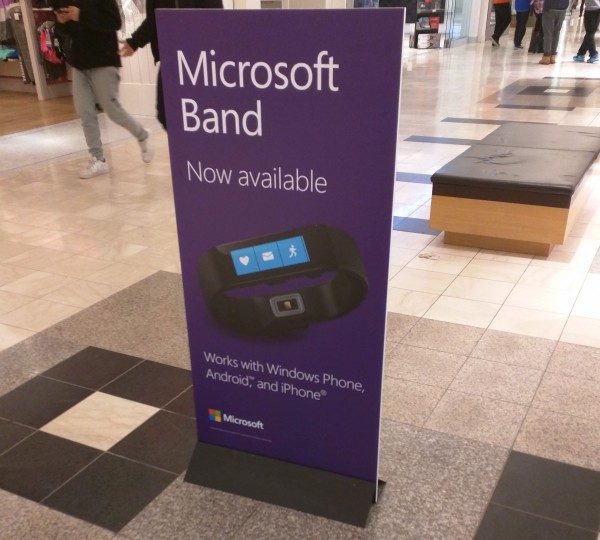 The salesperson was really motivated in her description of the Band wearable, and I was impressed by a word she used -- "we". Yes, while talking about Microsoft, she demonstrated that she is engaged in the company and refers to it as if she is a part of it. A telling sign of a bad corporate culture is when an employee instead says "they" when discussing their employer. 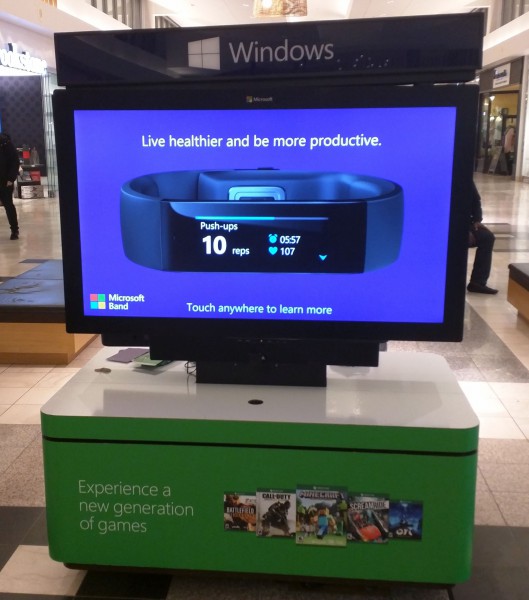 She had me try on the medium Band first, but it proved to be too tight. Next, I tried on the large and it was perfect. With the wearable on my wrist, I started to swipe through and see all of the features. As I was doing that, Christy showed my wife and I all of the cool things it can do. While counting steps and monitoring your heart is to be expected, I was very impressed that it can monitor my sleep patterns and monitor the UV light to warn me about sun exposure. The built in GPS can track my walking distances. 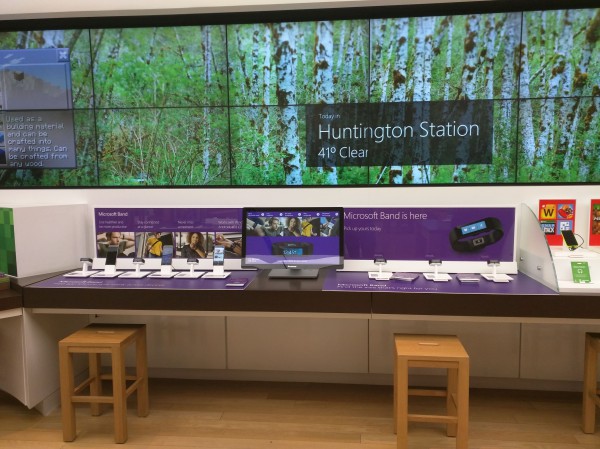 Health aside, it can also alert me to emails and texts as well, making it a tool for staying aware of pending communications. This gives it similar functionality to smartwatches, but it is just so much more than that.

As someone who is fairly adverse to spending money, and agonizes over purchases before making a decision, I eagerly told her to ring me up! My wife was surprised by my impulse buy, as it is a rarity for me, but she confessed she also was impressed and wanted one too. This is very out of character for her, as she couldn't care less about tech. If I come away impressed with Band, she may get one in the future. 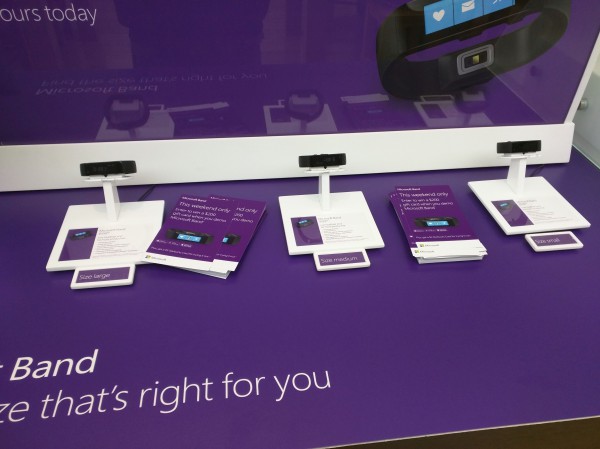 So back to my health. Yes, I am overweight and getting fit can be quite difficult. For a skinny person, it can be confusing as to why a fat person doesn't just stop eating junk and exercise. Heck, if it was that easy, no one would be overweight. Believe me, I do not expect the Microsoft band to be a magical way to get in shape -- I cannot wear it while watching TV and eating chips and expect results. As a tech geek, however, I do expect it to motivate me and hopefully, not give up. I will be using the associated Microsoft Health app as the tool to meet my goals. 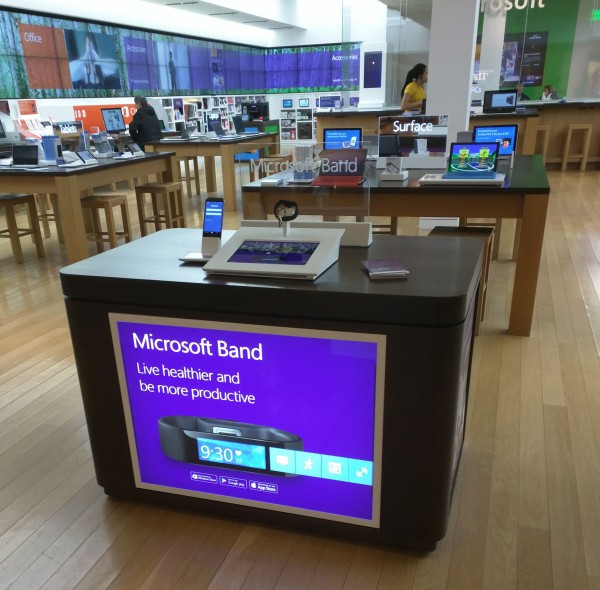 So can Microsoft Band save my life? On its own, no, but it may be the boost I need. Time will tell if it truly helps me, but I will address that in a future review.

You can follow me on Twitter here for periodic updates on my weight loss and day to day experiences with the wearable. Oh, and the Starbucks gift cards? I will use them on unsweetened hot green tea.

You can see my unboxing below.

50 Responses to I'm a fat guy and I bought the Microsoft Band wearable -- Can it save my life?