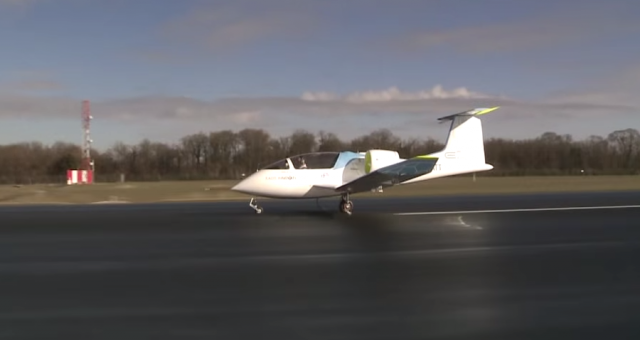 If you thought cars were the only means of transport being pressed hard by the "green" idea of lowering CO2 emissions, you were terribly wrong.

Even though they’re not exactly the center of attention, airplane makers are also looking for ways to switch to electric-powered engines, and now Airbus has unveiled an interesting two-seater.

During the Paris Air Show, it unveiled the E-Fan 2.0 prototype aircraft. The all-electric vehicle claiming to be a "plug-in" plane that has a wingspan of 31 feet. In those wings lie 120 lithium-ion polymer batteries, powering twin 30kw engines that are capable of flight speeds up to 136 miles per hour.

The plane is crafted from carbon fiber composite materials, keeping the aircraft’s weight at an incredible 1100 lbs when empty.

The two-seater plane is nearly silent and has zero Co2 emissions, but is only able to stay up in the air for about an hour.

Even though this is not a commercial plane that could take you anywhere serious, it clearly shows Airbus' intent on completely switching to renewable energy.

The company says it wants to have a 100-seat electric passenger plane by 2050, and the E-Fan technology is currently being used by Airbus to build electric aircraft training models for flight schools.

A four-seater E-Fan 4.0 is also in the works and it scheduled for production by 2019.

Airbus introduced the first E-Fan with a YouTube video in April 2014 (which can be seen above), describing the training aircraft as a "highly innovative technology experimental demonstrator based on an all-composite construction".