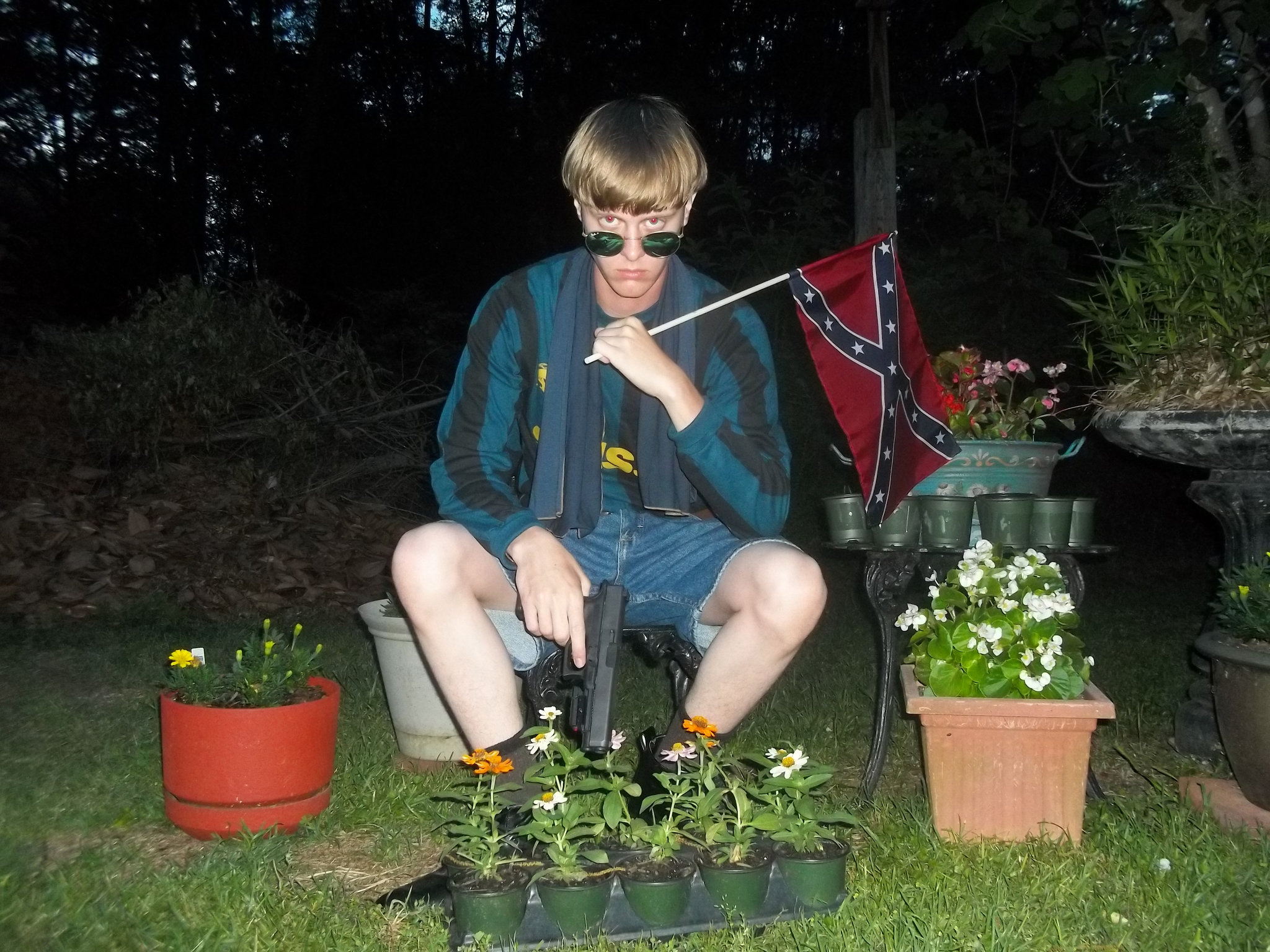 No less than a week ago, young Dylann Roof, a self-described hardline racist, decided to take nine wonderful lives in Charleston, SC. This was an individual who, through a manifesto since unveiled, had shaped his worldview so narrowly that he irreversibly joined the corrupted fringes of society.

But what really killed nine innocent people here? As much as our President wishes to believe it so, a gun wasn't the real cause of Roof's killing spree; it was an accessory to murder. Nor was the Confederate flag; this was merely hijacked window dressing to glorify one man's twisted reality. With as much debate currently focusing on these non-issues, the real causes which bred a monster by all definitions are sadly diluted from discussion.

The real issue which few seem to be questioning today: What exactly happened to Roof's support system? While the news stories seem to be stitching a clearer picture together, it's already evident that Dylann Roof had little in the form of a stable family life. The few acquaintances which Roof actually had contact with were distant drinking buddies at best. He had no positive fallback in his spiraling life, and found resonance in some of the worst gutters of the internet stained in race hatred.

Recovered photos of Roof posted online show an individual lacking any soul or sense of humanity. It's almost as if the devil sucked the emotion out of Roof and left behind a shell whose sole purpose was to destroy life. This was not an overnight occurrence; more likely, it was the systematic devolution of an individual.

Lacking any real set of friends, Roof's family situation was one which was severely fractured due to a divorce which took away Dylann's last semblance of familial stability. And as it has been proven time and again, people in such circumstances usually find something to fill this void in their life.

Inner city youth fall back on vicious gangs for their support structure. Disaffected youth in regions overwhelmed by religious fanaticism turn towards the likes of Islamic State or HAMAS. Dylann Roof chose the comfort of racist vestiges of the internet instead.

While the messages and belief systems of gangs and online hate groups differ in substance, they share much common ground with how they prey on impressionable victims. They both march to a never ending drum of victim-hood. Both point fingers at incessant scapegoats as the reasoning for their die hard beliefs. And both see themselves in consistent war with enemies both literal and symbolic in nature. 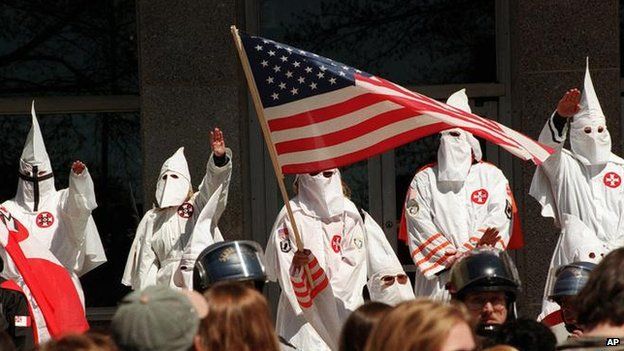 The American flag is flown at numerous KKK and related hate group rallies every year, as seen above. And it's public knowledge that the state flags of Florida, Alabama, and Mississippi all have varying creative reference to the Confederate battle flag. Where do we draw the line on censoring endless symbols of American heritage? Knee jerk politics are comforting in times of despair, but they bring few long term solutions to the table in the Roof debate. (Image Source: BBC)

Roof's descent into years of enthrallment with white power nostalgia and fascination has come to light all over the web. Numerous photos of Dylann show him gazing emptily into the camera while wearing a jacket adorning patches of the defunct states of Rhodesia and apartheid-era South Africa. Recent day trips of his seem to have centered around Civil War era plantations, slave mannequins, and beach fronts adorned with his own writing of the codeword "1488" that is an allusion to the white power movement at large.

Dylann's dedication to his newfound support structure and belief system didn't stop at mere adoration for a fringe cause. His morals quickly became twisted and corrupt after spending so much time dousing himself in these bowels of the internet. So much so, that his own manifesto outlines the ultimatum he set out to fulfill:

I have no choice. I am not in the position to, alone, go into the ghetto and fight. I chose Charleston because it is most historic city in my state, and at one time had the highest ratio of blacks to Whites in the country. We have no skinheads, no real KKK, no one doing anything but talking on the internet. Well someone has to have the bravery to take it to the real world, and I guess that has to be me.

It's fairly clear that Roof's infatuation with racial purity and white supremacy inbred a vicious circle upon Dylann. Exposure to one-sided fringe media around the time of the Trayvon Martin situation in 2012 grew into an outright militancy for a cause considered as nothing less than outcast by any average citizen.

But without a clear moral compass as a guiding beacon, and no familial structure to provide that clarity, Roof consumed himself with the lowest common denominator available -- all at his fingertips, in the comfort of his isolated bedroom.

Yet it's important we look at all of the other failed pieces of the puzzle which very much attributed to Roof's ability to commit such a heinous crime. Why was the father of this individual providing his depressed son with a handgun for his birthday? And what about Roof's proven terrible history with prescription drugs like suboxone? A fellow classmate even went on the record to say that he used drugs "heavily." Very much a "pill popper" the same student claimed.

Someone as depressed as Dylann, drunk on white supremacy teachings, popping drugs like a 1970s rock star, and without a family structure to provide a safety netting for his out of control life spiral? Pinning blame on guns or Confederate flags is downright absurd, and short sighted at very best.

Is Internet Censorship the Answer?

Dylann Roof's fractured family unknowingly left him to his own downward regard, and he sank into a void consumed with blind hatred and racist pride. The silver bullet in answering what could have saved Dylann from this bastardly path is easy to speculate on, but near impossible to pinpoint.

Is the real answer here to censor and close down hate-filled ghettos of the internet? Absolutely not. As I argued in the case against censoring Islamic State and its extremist propaganda, the survival of a just society is pinned on exposing the worst offenders of immorality and injustice. If the vermin of society are able to sway select portions of humanity in their beliefs, then we need poster examples of what evil and hatred looks like to fight the good fight. You can only defeat an enemy which you can identify. 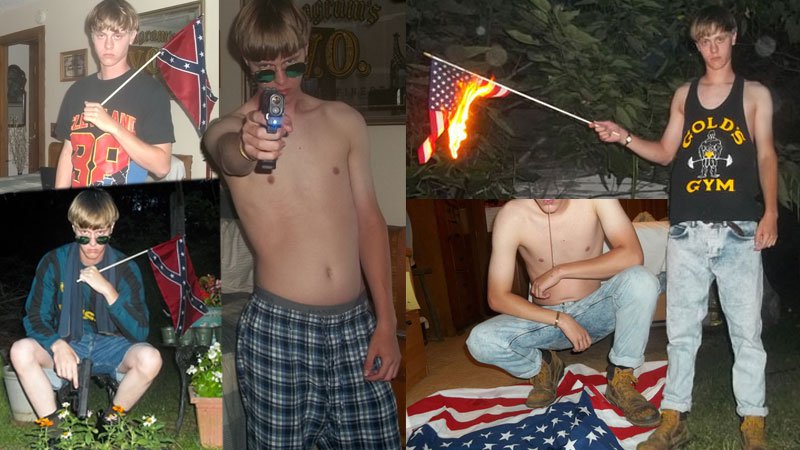 Years of drugs and family neglect, compounded with endless hours combing race-hate internet sites, bred a lifeless militant on a hellbent mission. The result, Dylann Roof, carried out the promise laid out in his manifesto. Failed societal support structures in Roof's life were the true cause of his moral unhinging, not lax gun laws or the Confederate flag. (Image Source: Radar Online)

Terrorist, gang member, or race warrior -- all have distinguishable traits, culture, and support systems which follow consistent patterns for easy identification. And as such, we have an obligation to use this information in proactively protecting today's potential next Roofs, and actively working towards preventing another collapse in positive support structures like in Roof's case.

But the most vulnerable in society, those easily caressed into directions of discredited beliefs, need to be caught before they are allowed to descend into moral oblivion. Dylann Roof had no life vest to cling onto. His family was non-existent for him. He was distanced and off-putting towards any resemblance of friends. And the criminal justice system, which came into contact with him on numerous instances, also failed to identify the growing monster behind an innocent face.

For who can we, or should we, pin this blame on? It's safe to say that this shared blame should be cast in many directions. The family for letting Dylann slip away. The father for purchasing a weapon for a potential menace to society. And potentially many others who may have, could have, noticed a disaffected soul crying out for meaning in life.

But debates about flags and gun laws have little to do with explaining the Roof situation -- or more importantly, preventing his spiritual successor.