For years companies have been battling with vicious groups to prevent them from “cracking” their products and services and use them for free. Microsoft, for instance, has implemented several measures including product activation, to make it harder than ever to crack the Windows operating system versions and its Office suite. Several game companies have devised systems where, until a user connects and verifies the game title by them, it won’t play. But in a world where everyone is trying to crack down on piracy, a company is embracing it and giving pirates a chance to turn into legit users.

Security firm Malwarebytes announces Amnesty program, under which it is allowing users to enter the license keys they gleaned for cheap from shady dealers, or simply illegally obtained it from somewhere, and issuing them with a new serial key. The new license key in question will be unique to the user, the company says, and it will offer a 12-month subscription to the premium (paid) version of Malwarebytes Anti-Malware security suite.

“The Internet is full of pioneers and cowboys. It’s also got its fair share of pirates and trolls. Some of those bad guys may have duped you into purchasing a counterfeit version of Malwarebytes Anti-Malware. Or perhaps we’ve simply detected a problem with your key. Not to worry. We’re here to help.”, the company says.

“Malwarebytes is offering a free replacement key for Malwarebytes Anti-Malware Premium customers who have been inconvenienced by piracy or abuse. This new key will be exclusive to you going forward.”, it further notes. 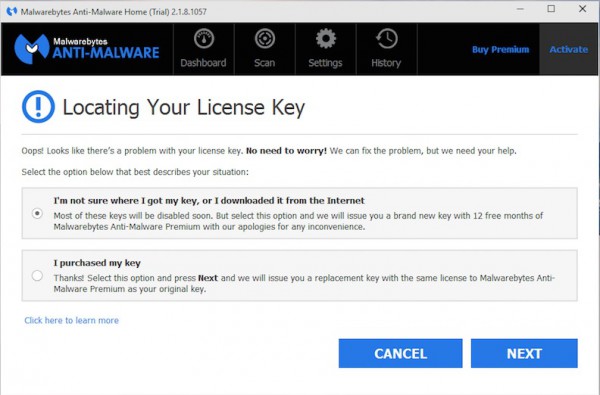 So what do you need to do? Download and install the latest version of Anti-Malware Premium (direct link here). Once done, go to the activate section and enter your illegally obtained keys. This will take you to a new dialog box where you need to select the option that says, “I’m not sure where I got my key, or I downloaded it from the Internet”. The company will issue you a brand-new key with 12 months of premium subscription.

For those unaware, Malwarebytes’ anti-virus tools are among the best security suites out there. On the face of it, Anti-Malware topped the charts beating counterparts by Kaspersky, F-Secure, Avast, AVG, ESET Smart Security and all other security suites last year in a test conducted by commendable independent antivirus research group AV-TEST.