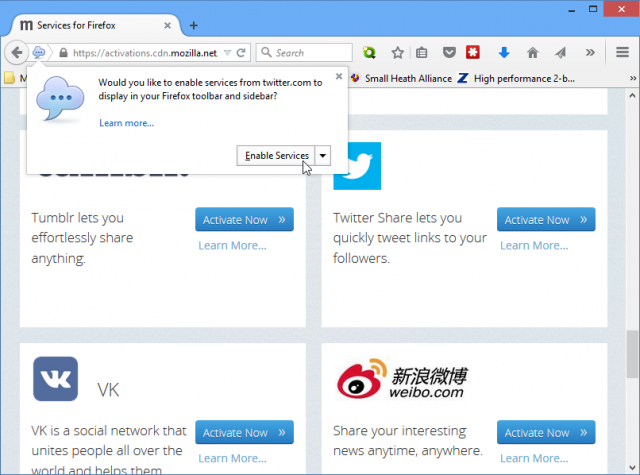 Firefox is set to introduce a host of new features in an attempt to win back users. The web browser, developed by Mozilla, has seen its usage share fall steadily since 2010 as other browsers, notable Google Chrome, have become more popular.

In an email to Firefox developers, the browser’s director of engineering Dave Camp outlined the Three Pillars of the new Firefox, features that he hopes will ensure that the next release is the best it can possibly be.

The first pillar is Uncompromised Quality and focusing on existing features. Any half-finished ideas need to be refined to perfection or removed -- a program that is being dubbed internally as "Great or Dead".

"Every feature in the browser should be polished, functional, and a joy to use", Mr Camp wrote. "Where we can’t get it to that state, we shouldn’t do it at all. In some cases that will mean spending time to make it great. In other cases that will mean removing code that we don’t see ourselves improving any time soon".

The second pillar, Best of the Web, focuses on add-ons, specifically improving security and performance and increasing the number of partnerships with third parties.

Uniquely Firefox is the third pillar and is less specific. Its main aim is to attract new users by focusing on distinguishing features like Private Browsing mode.

The other major change coming to Firefox is the decision to switch from its XUL and XBL languages currently used to create the user interface. Most of the web now uses HTML5, but it is not clear what route Firefox will go down once it decides to ditch its old browser languages.

It remains to be seen whether the proposed changes to will result in users and developers coming back to Firefox, but Mozilla will certainly be keen to prevent its userbase from getting any smaller.