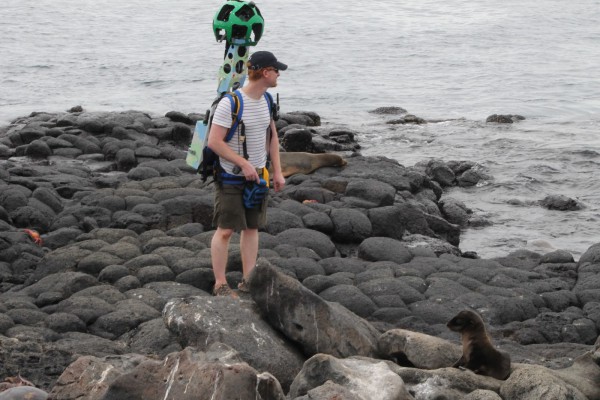 Sir Isaac Newton famously said that "If I have seen further, it is because I stood on the shoulders of giants". Newton referred to the scientists who came before him, but Charles Darwin could have uttered a similar phrase. The explorer and scientist visited the islands of Galapagos and saw literal giants in the form of turtles, or tortoises to be precise. In fact, Darwin brought one home to England, though Harriet eventually resided in Australia before she died at the age of approximately 176.

Now you can see these famous, and seemingly ageless, creatures on Google Maps. No need to board the HMS Beagle and set sail, just look on your computer.

"The giant tortoises of the Galapagos Islands have been stalwart survivors for centuries, but the last few hundred years have been rough. Once so numerous that sixteenth century explorers actually named the archipelago 'galápago' for the old Spanish word for tortoise, the rats and hungry sailors that followed them caused the tortoises’ numbers to dwindle almost to extinction", claims Raleigh Seamster, program manager for Google Earth Outreach.

Today the area is an international wildlife treasure which is protected by park rangers. That doesn't mean you can't visit, of course. Tourists are encouraged to stop by, but tread carefully. "Thanks to the conservation effort that saved them, you can now view the tortoises in their natural habitats on islands like Pinzón and Isabela, happily traversing the wild terrain or just enjoying a morning meal".