Pebble site is down, app may be as well 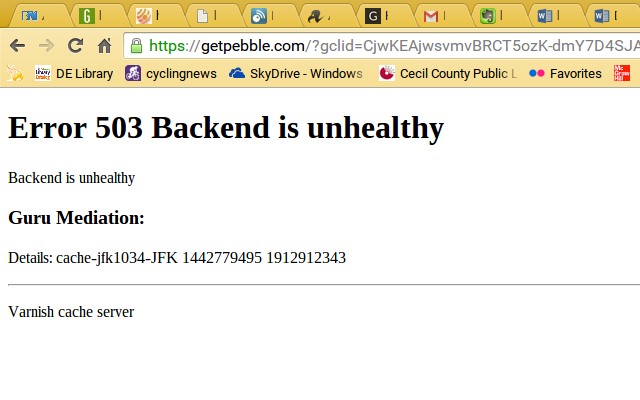 The smartwatch is the latest technology darling these days with Pebble, Android Wear and, most recently, Apple. But technology can fail, sometimes badly. Just this morning my home automation left me sitting in the dark (again). Worse Amazon, who's Echo device controls it, was down making a reset impossible and leaving the only option as switching to manual control and using that old-fashioned switch thing on the wall.

According to the Register, Amazon wasn't the only one out of luck, as it's own AWS service took it down, as well as Netflix, IMDB and others.

That leads us back to the smartwatch. Pebble suddenly stopped displaying the Weather Channel current temperature earlier today. I opened the app on the LG G4 to find it disconnected. No problem, tap to connect. Nothing but an error message. Multiple tries later a reboot of the phone was in order. Still nothing. A visit to the site revealed the above image.

It may be completely unrelated to the app problem, but it's quite a coincidence. Either way, at the very least, the site has a nasty sounding message at the moment. We'll update this when more is known about the problem.