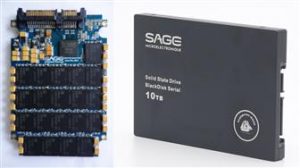 A little-known Chinese manufacturer, Sage Microelectronics, has managed to out-gun its much bigger rivals (Kingston, Sandisk and Samsung to name a few) by bringing to market the world’s first 10TB 2.5-inch (9.5mm) SSD.

The drive was first demonstrated last month at the China Data Summit 2015 in Beijing and comes months ahead of its previous launch target. Samsung is the only big SSD vendor that has announced an SSD larger than 10TB.

At 15.36TB, its PM1633a is the biggest drive ever announced, surpassing significantly the 10TB drives that Seagate and Western Digital are expected to unveil in 2016. But it has yet to be brought to market and is likely to be thicker than the industry-standard 2.5-inch thickness.

What makes the feat even more noteworthy is that it uses a single layer PCB where most would settle for a couple and used MLC rather than TLC NAND to improve the useful lifespan of the product.

In addition, the company engineering team, headed by Dr. Jeromy Luo and Professor Chris Tsu, have used a denser multi-chip packaging and tweaked the controller so that the SSD’s performance remains more or less constant over time, regardless of how full it is.

The flip side is that the SSD is likely to be far slower than the competition as it focuses on features rather than performance. It would still be far faster than the enterprise hard disk drives currently available on the market.

The average retail price of SSDs has been steadily falling over the past three years with the demand for solid state storage driving investment and the rapid transition to finer geometries, something that allows higher capacities to reach the market while still remaining in the black.

A consumer-grade 1TB SSD drive currently costs around £250 while a 4TB hard disk drive can be had for around £80.