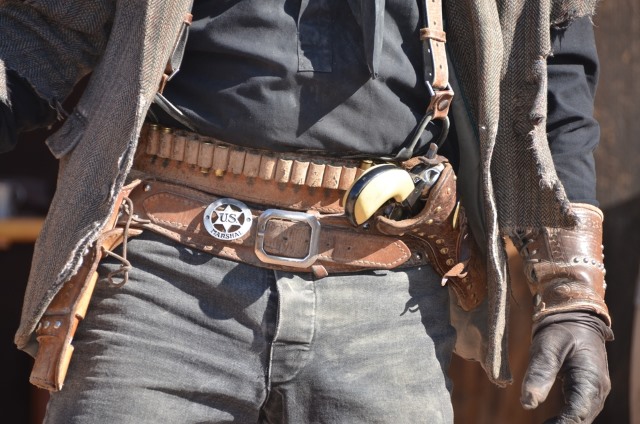 My colleague Brian Fagioli has referred to the web being rather like the Wild West. I'm inclined to agree, but that's not to say that we have reached the same conclusion for the same reasons. For me, the web -- like the Wild West -- is not a world filled with danger, but one occupied by vigilantes. As a proponent of free speech, I find this concerning. One of the most highly-lauded of vigilantes is the disparate group marching under the ragged banner of Anonymous.

One of its taglines is 'We Are Anonymous', a phrase that can be uttered by anyone as there is no membership process -- if you say you are part of Anonymous, you are part of Anonymous. The group is not, for the most part, organized. Individuals and factions can fight for or against whatever cause they want, just like real-world vigilante groups. But Anonymous is not alone. There are hacking collectives and other online crusaders who see fit to take the law into their own hands. This might sound wonderful, but it's not necessarily a good thing. As New World Hackers demonstrate, attacks can target the wrong people and restrict free speech.

Just the other day, New World Hackers 'accidentally' took down the BBC's websites and online services. The group's main aim is to take down IS (or ISIS, ISIL, or whatever moniker you prefer) and such tub-thumping will be welcomed by most people. But just because most people agree with a course of action, that doesn’t make it morally right. In this instance, it is easy to get behind New World Hackers for tackling something so unpleasant (Islamic State, not the BBC), but there would be nothing to stop a hacking collective attacking the websites of secularists for not believing in a god, people who hold different religious views, pro-abortion supporters, and so on.

Now the group has attacked Donald Trump, launching a DDoS attack that took the presidential candidate's website offline for a short time. There have been virtual cheers of support -- understandable as Trump is a ridiculous buffoon -- and this is worrying. Speaking to HackRead, New World Hackers said:

We targeted Trump site because this guy can get quite racist. It doesn’t matter to us how crazy he gets. Our member “doc” actually attacked donaldjtrump.com with a layer 7 attack and he plans to attack trump’s site later on again

What the group has done is wrong -- legally and morally -- but it will be accepted because it has a manifesto that sets out the aim of targeting IS/ISIS/ISIL. Yes, many of Trump's views are utterly disgusting, but that doesn’t mean he's not entitled to hold them and share them. Is hacking and online vigilantism OK when the target is someone/thing wildly seen as objectionable? Who draws the lines?

There is the pretence of fighting a dangerous evil, but censorship is just as dangerous. ISIS is widely regarded as evil (and I'm not disagreeing with this view), but many people would argue that abortion is evil (I wouldn't, for the record). Would it be acceptable for Anonymous or New World Hackers to start trying to wipe pro-abortion (or pro-choice) groups from the web? Why not start trying to wipe out the web presence of all republicans, socialists, Christians or Muslims while you’re at it?

It goes without saying -- I hope -- that I am not a supporter of ISIS. I find Donald Trump to be an abhorrent human being, spouting ideas that are divisive and dangerous. But I don’t want to silence them or anyone similar. There are countless political groups, religious movements, and organizations whose ideas I find insane, potentially harmful, and loathsome, but I would never want to censor them or prevent them from having an outlet; nor do I want anyone to do this on my behalf.

The beauty of the web is that it is democratizing. It's a platform that just about anyone can use. That -- just as with other media -- means having to take the good with the bad. It's not right to silence the expression of views that go against what you believe, or even those that go against what most people believe. Freedom of speech for you means freedom of speech for all. Yes, this means you might encounter disgusting, objectionable people, groups and views online, but that's tough; that's life. No one has the right to dictate what views are acceptable, and even less of a right to try to silence others. Like it or lump it, you’ve got to take the rough with the smooth.