Predictions 5 & 6: Drones and driverless cars? Not this year

When it comes to predictions it is often easiest just to take some really popular new technology and point out the obvious time it will take to be actually adopted. You could say I’m doing that here with drone deliveries and driverless cars, but I like to think my value-added is explaining why these will take so much longer than some people expect.

Amazon.com has been making a lot of noise about using small helicopter drones to deliver packages. I’m not here to say this is an impossible task or that drones won’t at some point be used for this purpose, but what I am saying is that it won’t happen this year, won’t happen next year, and in any true volume won’t happen even five or 10 years from now.

Here’s an interesting story about the economics of drone delivery. It points out that Amazon loses $2 billion per year on second-day delivery to its Amazon Prime customers. This doesn’t mean Prime isn’t profitable for Amazon, just that actual shipping charges are $2 billion more than what Prime members are imputed to be paying for that part of the service. The story and a paper linked within it also drop facts like the energy cost of electric drone delivery will average $0.10 per package, drone purchase, upkeep and maintenance will be another $0.10 per delivery based on a 10 year drone lifespan and six deliveries per drone per day. And so they say the cost per delivery will be something around $0.20 for up to two kilograms. Eighty percent of Amazon packages are under two kilograms and so drones are declared "economically viable".

Do you have a drone or did you used to have one? If you no longer have it, did your drone last 10 years? Based on our Christmas drone experiences the past couple years in the Cringely household I’d say our typical drone lifespan is one week. Amazon’s will probably be longer, but 10 years? And when that inevitable crash happens, how will they account for the loss of the drone and its cargo? How much should be added to the delivery cost to cover insurance?

Even more damning is the labor economics involved. Commercial delivery drones will require FAA licensed pilots and Amazon expects those to cost $100,000 per year each, though for some reason they don’t bother to use that number in their cost calculations. If Amazon drone pilots are fully employed and never take a break, based on their economic model’s 20 minute roundtrip time, they’ll be able to fly 6,000 deliveries per year for a per-delivery labor cost of $100,000/6000=$16.67. Remember Amazon’s present Prime deliveries cost around $8 each so to save money the company is proposing a new solution that will cost at least double that amount for labor alone, and that doesn’t include labor to load the drone.

Labor costs aren’t going down. If the eventual plan is to make the drones autonomous nobody at Amazon or the FAA says that’s in the works. Then there’s the very complexity of such an operation at scale, which brings me to this picture of telephone wires in New York City circa 1887. 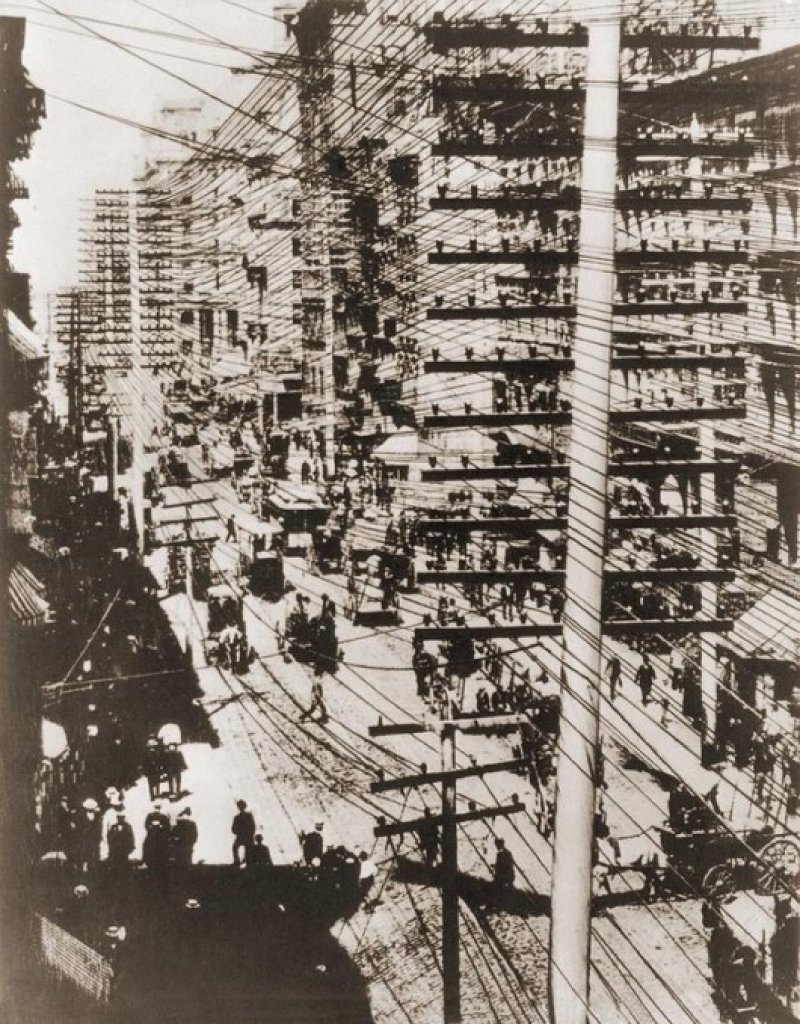 Imagine every delivery truck and bicycle messenger replaced by something that could easily smash into your head. By the way, these telephone wires disappeared in New York the very next year, destroyed by the Great Blizzard of 1888. After that blizzard the wires were put underground where drones cannot go.

So is Amazon crazy or do they know something about drone delivery that we don’t? After all, Amazon paid $775 million in cash to buy a drone company. My friend John Dreese thinks he has the answer. John is a professional aerodynamicist (you can buy his desktop software here) and a novelist (you can buy his book Red Hope here -- it’s about Mars and very good). John thinks Amazon isn’t going to buy all those drones after all… we are.

I don’t think Amazon will deliver packages via a limited number of super-drones. Instead, if I was a betting man, they will lease/rent/sell drones -to- customers, which will then fly to a centralized Amazon distribution site and pick up the packages to return to the owners house -- and stay at the house.

Or perhaps there will be one drone designated per street/block?

Not only can Amazon charge for the devices themselves, but they can charge a recurring fee for what is going to be almost immediate delivery.

Advantages for Amazon:
1) Selling/leasing the drones to the consumer will be a line of income.
2) Drone repair warranties will be an extra line of income.
3) Instead of a single drone learning how to approach/deliver packages to all houses in an area, each Amazon Prime HomeAir drone will only have to memorize the path between the house and the Amazon distribution site.
4) When a drone fails, it doesn’t knock out an entire zone for delivery.

John is assuming drones will fly autonomously, which we’re so far told they won’t, but in the longer run who knows? In any case I see mass drone delivery being a decade or more away. Before then we’ll have to go through drone registration, which I don’t expect to be bad at all since it looks almost exactly like the "licenses" we used to get for using CB radios. Remember those? The drones of the 1970s.

Now to autonomous cars, which I do believe will eventually be hugely successful. There are just too many advantages to a technology that replicates a horse that knows its way back to the barn. Self-driving cars have many safety advantages and can clearly be more network-efficient than human drivers, but the big gains in that regard won’t happen until most cars -- probably all cars -- are self-driving. That’s when they’ll operate at high speed going down the road only a meter or less apart. This sounds more dangerous than it is because if you are driving down the freeway and the self-driving car in front of you slams on the brakes it won’t have time to decelerate enough to even damage your car, coming-up from behind. Running at the speed limit and only one meter apart highways will be able to accommodate up to six times as many cars and they’ll be going faster, too.

But it only works that way if all the cars are autonomous. Or you are being driven by The Stig.

At normal attrition rates, replacing 90 percent of the auto fleet will take 30 years -- 30 years to realize the full benefit of self-driving cars. I don’t think it will actually take that long, though, because the government will find ways to accelerate this trend to save on infrastructure and pollution. But the best they’ll be able to do is probably doubling the rate of adoption meaning self-driving cars will become an overnight sensation 15 years from now, not in 2016.