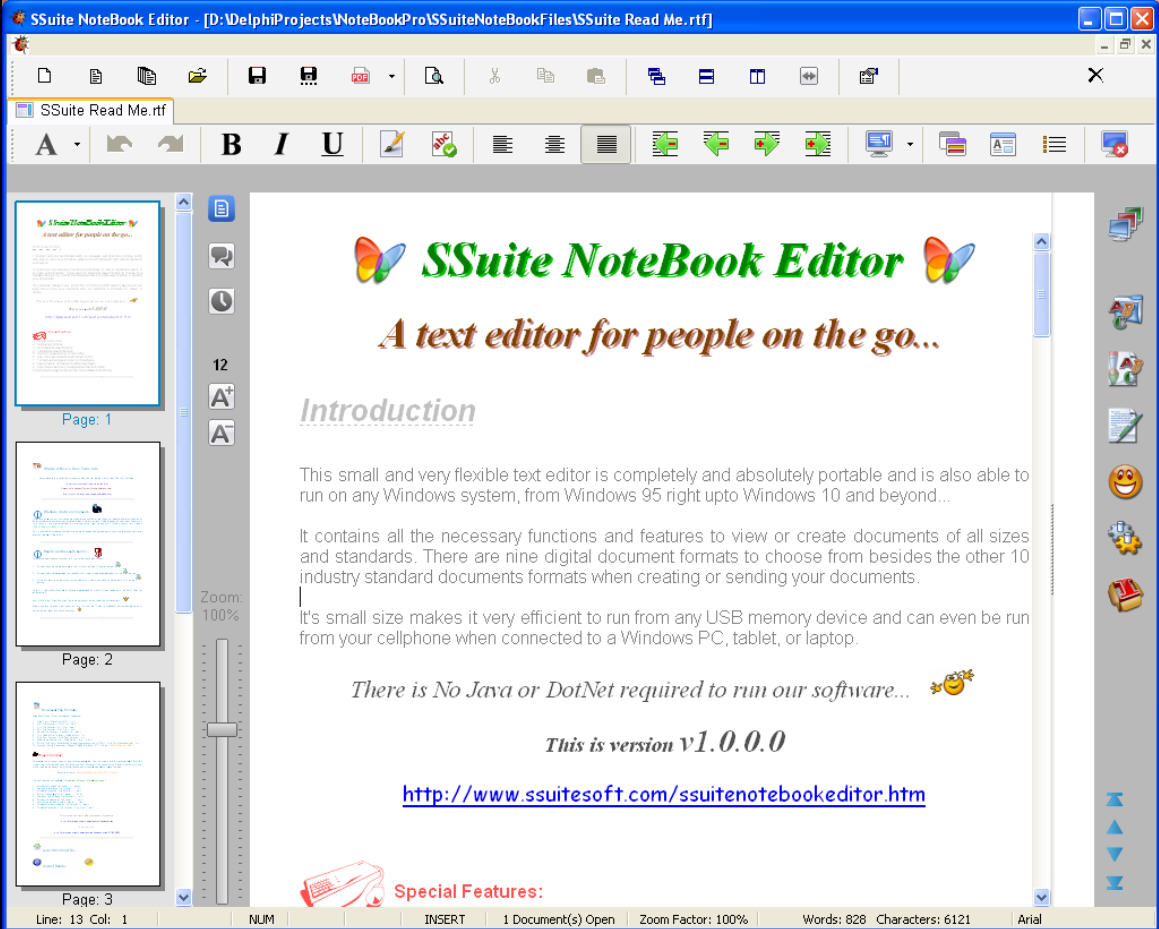 If you’ve tried your share of WordPad replacements then you’ll know they’re usually identikit me-too products with barely any interesting ideas of their own.

SSuite NoteBook Editor is a rare exception which manages to bring something a little more original to the standard text editing feature list.

Things get more interesting with the collection of "Insert…" tools. This isn’t just about adding pictures, you also have options to use symbols, emoticons, or commonly-used text snippets like names or addresses.

A "Character Art" text gives you some control over text fills and shading, handy for simple logo effects or whenever you need a heading with extra impact.

There’s even an option to create and insert a table of data. RTF doesn’t support full table formatting but the program allows you to enter data or images, and insert them as an image or metafile. In theory you can even import a text file and have it formatted automatically, although this didn’t work for us.

Navigating lengthy documents is easier than usual, thanks to built-in thumbnail previews for every page. Just spin the mouse wheel to browse the file, and click whatever page you need to open it.

Whatever you’re doing is recorded for posterity in the Document History dialog. There’s no artificial "last x documents" limit here, by default it saves everything, making it easy to reopen old files later.

There are also problems, most notably with the slightly disorganized interface. We spent a while looking for the "Insert Image" dialog, for instance, because it wasn’t with "Insert Emoticon" or "Insert Character Art". Instead the program buried it, along with "Insert Object" and "Insert Table", under a "Set Font Attributes" button.

One or two of the individual functions need work, too. "Insert Table" in particular has an awkward, clumsy interface. You’ll figure it out, but it’s not as intuitive as it should be, and there’s only very basic help to point you in the right direction.

Despite that, the Character Art tool is a plus, along with "Insert Table" (once you’ve figured it out), thumbnail navigation, image export and more.

SSuite NoteBook Editor is also portable with no major dependencies, and is no-strings free, so if you’re at all interested then it’s easy and safe to try.

SSuite NoteBook Editor is a freeware product for Windows 95 and later.

4 Responses to SSuite NoteBook Editor: not just another WordPad replacement