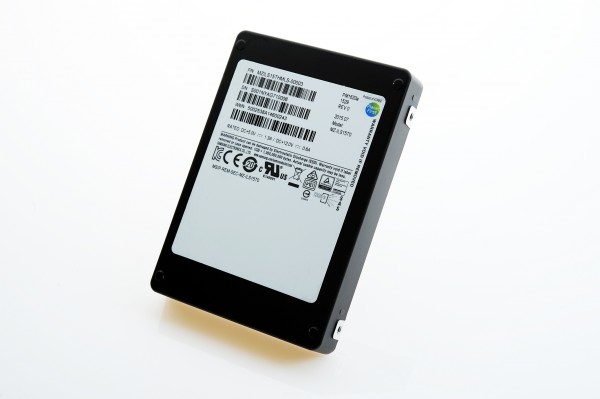 Back in the 1990's, my first-ever computer came with a 4GB hard drive. At the time, this was absolutely massive -- my computer-literate friends told me I would never need a bigger drive in my lifetime. Obviously, this thinking was wrong -- 4GB is considered rather small for a flash drive nowadays. Heck, when it comes to technology, never believe anything is "good enough", or that things won't get better and faster.

Today, Samsung begins shipping an SSD that makes large HDDs looks worthless by comparison. You see, the PM1633a is the world's largest solid state drive, with a capacity of 15.36TB! No, you aren't dreaming -- this is real.

"The unprecedented 15.36TB of data storage on a single SSD is enabled by combining 512 of Samsung’s 256Gb V-NAND memory chips. The 256Gb dies are stacked in 16 layers to form a single 512GB package, with a total of 32 NAND flash packages in the 15.36TB drive. Utilizing Samsung’s 3rd generation, 256-gigabit (Gb) V-NAND technology which stacks cell-arrays in 48 layers, the PM1633a line-up provides significant performance and reliability upgrades from its predecessor, the PM1633, which used Samsung’s 2nd generation, 32-layer, 128Gb V-NAND memory", says Samsung.

The famed company further says, "the PM1633a SSD sports random read and write speeds of up to 200,000 and 32,000 IOPS respectively, and delivers sequential read and write speeds of up to 1,200MB/s. The random read IOPS performance is approximately 1,000 times that of SAS-type hard disks, while the sequential read and write speeds are over twice those of a typical SATA SSD. Inside the new SSD lie Samsung’s advanced controller units that support the 12Gb/s SAS interface, along with a total of 16GB of DRAM. Samsung also uses specially designed firmware that can access large amounts of high-density NAND flash concurrently".

Of course, this is not intended for home users -- it is designed for enterprise use. With that said, I am sure many technology-enthusiasts would absolutely love to have it. While Samsung has not revealed pricing, I can guarantee that it will be too expensive for home consumers.

Where it will shine, however, is with the targeted enterprise sector. This will be absolutely brilliant for data centers and other similar applications. With that said, companies should probably be cautious -- trusting data to such a new drive could be dangerous. Samsung offers great quality, so I am sure the drive will be reliable, but I would still suggest IT departments do their due diligence with testing.