Windows 10 Anniversary Update to bring badge notifications to the taskbar 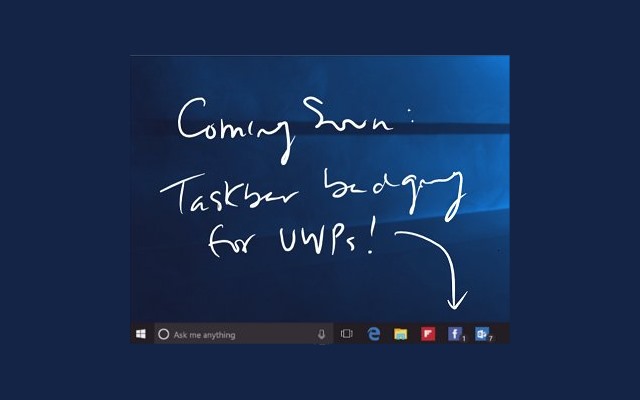 The idea of badges is a very familiar concept on mobile phones. A little numerical overlay on app icons provides at-a-glance info about the number of notifications there are to look at for different apps and services. Now Microsoft has revealed that the same feature is coming to the desktop.

Among the changes in Windows 10 Anniversary Update are taskbar badge notification for Universal Windows Platform apps. This new style of notification joins improved toast notifications and changes to the Action Center. Developers will be able to try out the feature soon, and we've got a sneaky glimpse of how things will look.

As with so many of the announcements to come out of Build 2016, Microsoft has not said exactly when this feature will actually see the light of day. Of course, it's Windows Insiders who will be able to try badges in action first, and with Windows 10 Anniversary Update pegged for a late summer release, it shouldn’t be long before we get to see a preview.

In the meantime, we can content ourselves with an image shared on Twitter by Microsoft software engineer Jen Gentleman:

Favourite announcement at #Build2016? Hard call - there were so many good ones.. Hope you didn't miss this, though 😉 pic.twitter.com/hraHxz1X39

It's a feature that has been a very long time coming. It's worth noting that taskbar icons have long been updatable to indicate the number if notifications that are pending, but the new system for UWP apps should make the process simpler and more widespread.