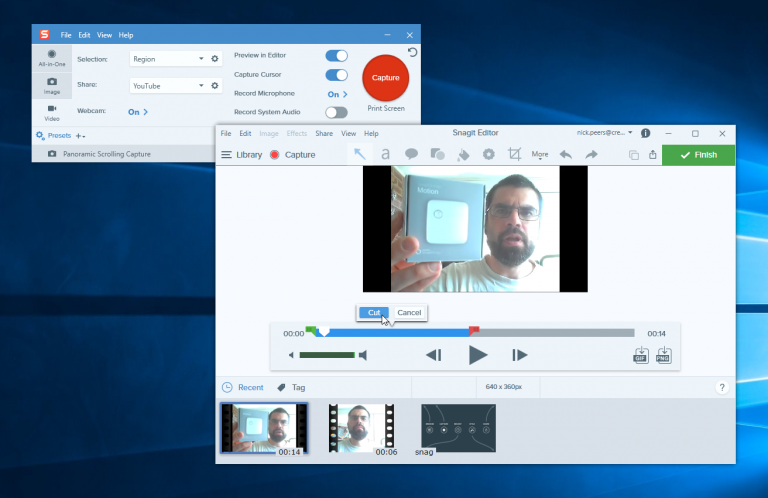 TechSmith has released Snagit 13.0 for Windows, a major new release of its screen-capture, edit and share tool for Windows PCs. The release is accompanied by Snagit for Mac 4.0.

Headline new features include a Panoramic capture tool, redesigned Capture Windows on the PC platform and a number of new tools, including the ability to create GIFs from video recordings with a single click.

Snagit 13 on Windows opens with a new design for capturing images and video. The interface is designed for on-the-fly use and is accompanied by an updated tool for starting new captures from the Capture Editor.

Recording from webcams has been improved, with Snagit now able to preserve its real-time encoding while recording. It’s also now possible to toggle between webcams and screen video during recordings, while support has been widened to include all built-in and standard USB webcams.

A number of new tools have been added to the Editor, including new crop and text tools, a color picker, auto-resizing canvas and brand new magnify tool. Users can now export video as animated GIFs with a single click too.

Both platforms gain a Share History function, giving users access to all shared captures from the previous 90 days. These are arranged according to date, name or destination, and users can then open the shared link or copy it for repeat sharing. Mac users also gain the Capture History (Library) feature already present in the Windows build.

Both Snagit 13.0 for Windows and Snagit for Mac 4.0 are available now as a free trial downloads – Windows 7 and OS X 10.10 are now the minimum requirements. Full versions cost $49.95 for a single-user license, or $24.95 when upgrading from a previous version.