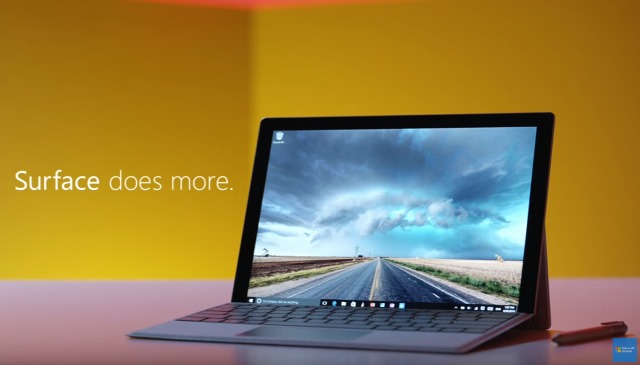 For a little while now Microsoft's ad campaigns have been less about highlighting its own products, but a vehicle for knocking others'. It's something we've seen numerous times with the company's Surface ads, and now there's another one.

This time around we see the Surface Pro 4 compared to a MacBook Air. Microsoft says the former is better than the latter because it has a pen. Oh, and a detachable keyboard. But the tone of the ad is just so ridiculous, it serves only to make Microsoft look pathetic.

The idea of one-upmanship in advertising is, of course, nothing new, but Microsoft has taken things to a whole new level, plumbing new depths. The new ad is so childish and imbecilic, it's enough to put anyone off Microsoft forever. 'Oh, but it's just a bit of fun', I hear you cry. But it's not. It's immature, asinine and... just dumb.

Let's start off with the obvious. In comparing the Surface Pro 4 with the MacBook Air 13", Microsoft is committing the cardinal sin of failing to compare like with like. The MacBook Air is a laptop, while the Surface Pro is a tablet. One is designed to be typed on, the other has been specifically designed to be used as a touch-screen device. It's like saying a bowl is better than a plate because it can hold soup. Different tools for different jobs.

You could, of course, add a keyboard to the Surface Pro 4, and this is precisely what Microsoft has done in the ad. Remember that the Surface Pro 4 does not include a keyboard as standard -- you'll have to spend extra cash on that if you want to type on proper keys rather than an on-screen keyboard. Microsoft helpfully reminds you of this in miniscule letters at the bottom of the screen: "Type cover and apps sold separately. Screen images simulated!"

It's not strictly accurate to say that the keyboard detaches from the Surface Pro. In order for it to detach, you first have to buy one and then attach it. Microsoft has descended into playground jibes along the lines of "my mum's better than your mum" followed by an irrational and nonsensical reasoning.

And that song! Jeezo! I'd rather you didn't subject yourself to watching the ad to hear it, so I'll transcribe the lyrics:

The Surface Pro comes with a pen

That lets you write on the screen

If you try to write on a plain old Mac

The difference can be seen

Get the Surface Pro

That keyboard detaches from the screen!

Get the Surface Pro

Or hire a new ad team.

If you really do want to see Microsoft's latest exercise in absurdity, check out the ad below: