QOwnNotes is a versatile notepad and to-do list manager 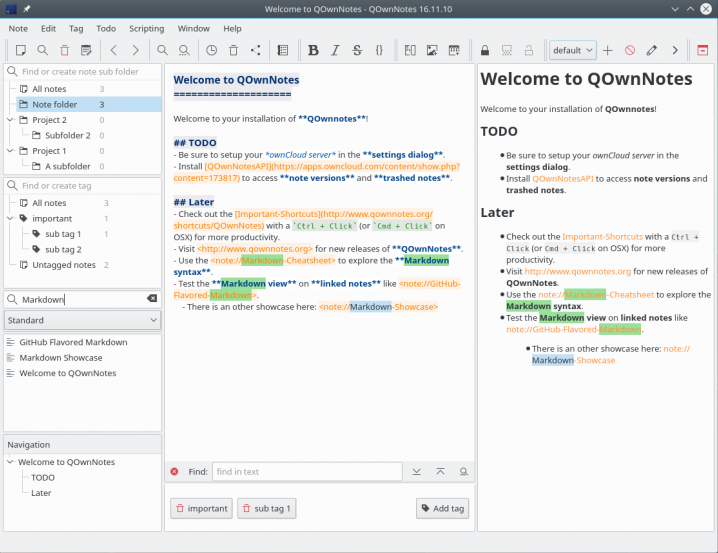 At first glance, QOwnNotes doesn’t seem like the most interesting of apps. An "open source plain-text file notepad"? Aren’t there enough of those already?

Download and try the program, though, and you might be surprised at how much more it can do.

The core editor creates rich text notes, with images, hyperlinks, tables and more. Formatting can be managed by pointing and clicking, or entering markdown, then exported as PDF or HTML.

You’re able to organize your notes into folders and subfolders and hyperlink from one page to another, perhaps creating a basic wiki-like structure.

The more limited to-do list manager can’t compete with the specialist competition, but it does enabling syncing via Calendar Plus, a CalDav-compatible server, or a self-hosted ownCloud-calendar. That could be interesting if you don’t trust others with your data, although the built-in AES-256 encryption should keep your data safe, wherever it is.

QOwnNotes has builds for Windows, Linux and Mac, enabling syncing across all your desktops, and with the right app (there are suggestions on the developer’s site) you can share your data with Android and iOS devices, too.

This would be hugely impressive all on its own, but open almost any menu and some major new feature appears.

We missed it at first, but hidden away at the bottom of the edit mode is a single option for autocompletion, equation solving and opening URLs. So if we typed "2+2=" and pressed Ctrl+Space, would it…? Yep, "=4": it’s a mini-calculator, too.

While most of this is easy to use, QOwnNotes is really aimed at expert users who like to take full control over their software, so it’s no surprise that there’s a huge amount of configurability. You don’t just get to customize the 200+ keyboard shortcuts, for instance -- every element of every menu can be reorganized as required.

QOwnNotes is available for Windows, Linux and Mac.