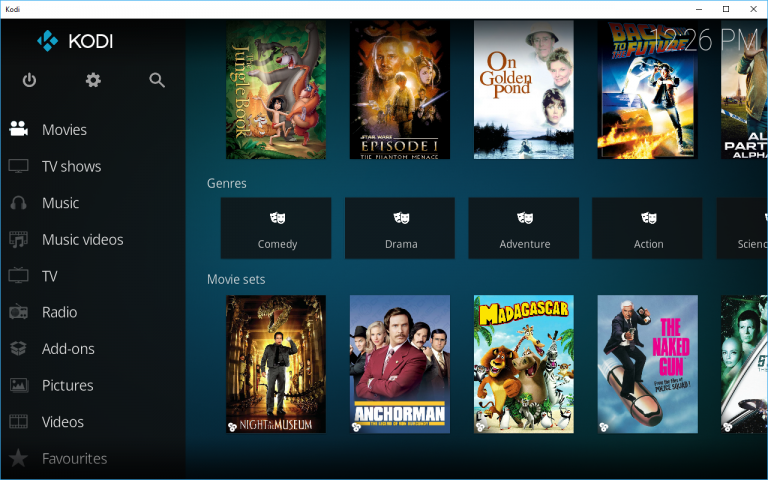 Kodi 17.0 opens with a major facelift in the form of two new default skins. Touch-friendly devices now use the "Estouchy" skin, while desktops use "Estuary", which has been optimized for 10-foot screens. In addition, the default web interface has now been switched to "Chorus".

Streaming protocol support has been extended too, with RTMP, MPEG-DASH, SmoothStream and NXMSL streams all now available through Kodi. DVD playback is now hardware accelerated on supported devices.

Kodi’s music library capabilities have also been further improved, with better tag scraping and increased browsing speed for libraries joined by support for both mood and artist role tags.

Live TV and PVR functionality has received a lot of attention during Krypton’s development -- now users gain convenient shortcut widgets to recent recordings and last played channels from Kodi’s home screen. Users also get the choice of showing either the PVR guide or channel window when Kodi starts.

The PVR interface has also been overhauled, with channels now able to be sorted by last played, while TV and radio recordings are shown on separate screens. The guide is now much more responsive when browsed.

Scheduled recordings has been revamped, with customizable options for instant recordings. Over 15 PVR add-ons have been developed for Kodi, and most have been updated to take advantage of the extensive changes unveiled in Krypton.

Kodi 17.0 is the first Windows build to be made available through the Microsoft Store as well as via regular download channels.

The Android build -- which now supports 4K video as well as HEVC, VC-1/WMV9 and VP9 codecs -- now requires Android 5.0 or later. It’s also been made standards-compliant with the official Android Audio API. Passthrough requires AudioTrack v23 or higher on devices, with support widened to include DTS-HD, DTS-X, Dolby TrueHD and Dolby ATMOS passthrough.

A complete list of the 125 changes and improvements can be found at the Kodi wiki.

Kodi 17.0 is a free, open-source download for PCs running Windows Vista or later, most modern flavors of Linux, plus Macs running OS X 10.7 (Lion) or later. The Android build requires a compatible device running Android 5.0 or later. An iOS build for jailbroken Apple TV and mobiles is also available.