In the latest Insider build of Windows 10 Creators Update, there has been an interesting change to the way updates are handled. Build 15058 of Microsoft's operating system now handles updates over metered connections differently -- and it could mean that you incur charges.

If you pay for your internet bandwidth by the gigabyte (that is, you use a metered connection), you may well be concerned about Windows automatically installing updates and costing you money. In previous builds of Windows 10 it was possible to block automatic updates on a metered connection so you were placed in full control of when the downloads took place. Now this has changed.

As noted by Richard Hay on Supersite for Windows, the wording on the Windows Update section of Settings has altered. Where it previously said "Available updates will be downloaded and installed automatically, except over metered connections (where charges may apply)", there is now a slight rewording and the addition of a second sentence that completely changes things:

We'll automatically download and install updates, except on metered connection (where charges may apply). In that case, we'll only download those updates required to keep Windows running smoothly. 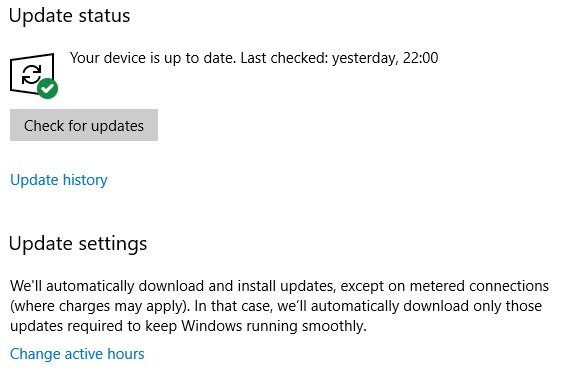 This is a fairly major change, and it means that control is wrestled from the hands of the user. But there are a few things to consider.

Firstly, this is still pre-release software, so it's possible things could still change before Windows 10 Creators Update is actually released (but, that said, there's really not long left for things to change).

Secondly, it's not clear exactly what's meant by "updates required to keep Windows running smoothly". This could mean security-related updates. If this is the case it is -- on the one hand -- nice to see that Microsoft is taking an active stance in ensuring that users' computers are protected. On the other, it is an example of Microsoft taking liberties, and in this instance it could prove to be costly for people who are using expensive metered connections.

Finally, it means that a method of blocking updates (should you feel so inclined) has been taken away. By marking your connection as being a metered one, it gave you another way to regain control and ensure that updates only happened when you wanted them to, or didn’t happen at all.

Microsoft is yet to clarify exactly what the implications of this change are, but on the face of it it does seem to be another example of the company forcing its will onto users.

Microsoft has issued a statement in response to this article:

We don’t plan to send large updates over metered connections, but could use this for critical fixes if needed in the future.