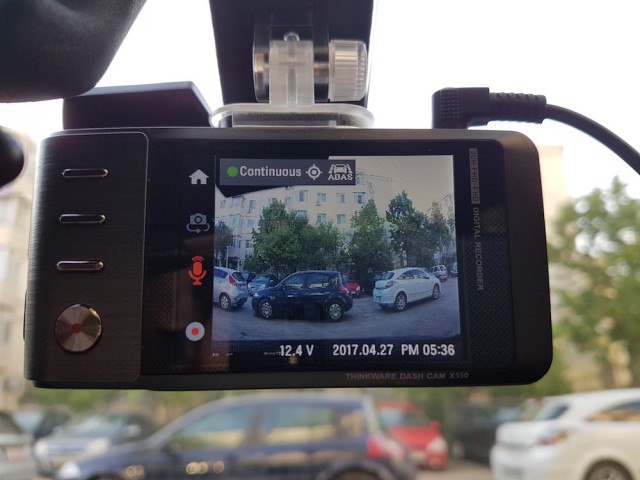 It's always a good idea to use a dash cam when you get behind the wheel. In case you have a close call or get into an accident, you'll have a video that you can show to the authorities or your insurance company. But there's also an entertaining side to it as well, which is just as important to some folks, as you can also record a spirited drive on a fun road or some interesting things that you stumble upon on your daily commute.

Pretty much all dash cams let you do those things, but some do it better than others. Thinkware's X550 is among the best premium options on the market, featuring a solid camera with an effective "super night vision" mode, GPS info, driver assistance, speed and red light camera database, LCD display on the back, and dedicated software for PC and Mac as its standout features.

You can get the X550, which is the range-topper in the X series, in three different versions. There's a basic model, which includes the camera and accessories, a bundle that adds a hardwiring cable to hook it up to the battery directly, and a third version that also gets you a rear camera module. I've tested the basic package, which I think offers the best value for most people.

On top of the X550 itself, the package includes a power cable with a cigarette lighter plug (12V car plug) and a couple of holders, a windshield mount, a 32GB microSD card with SD and USB adapters, and the usual documentation. 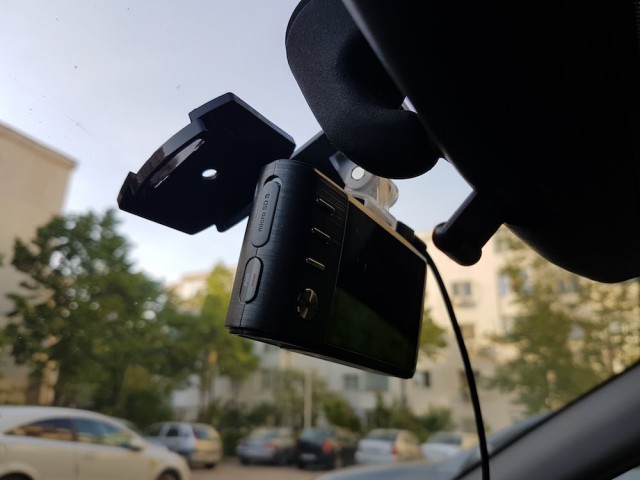 Setting it up is pretty easy. Thinkware recommends that you place it behind the rear view mirror, which gives you a good view of the road ahead, with the camera lens aligned with the middle of the hood. The camera lens is offset, so keep this in mind when you install the windshield mount. The cable can be routed along the edges of the windshield, using the holders provided in the box.

The X550 starts recording automatically when you plug the power cable in the cigarette lighter/12V socket. Just make sure to throw the microSD card in first. Since Thinkware includes one in the box, which is a nice touch if you ask me, that's what I used to record the videos. I've had no issues with it whatsoever.

The windshield mount requires you to slide the X550 to hold it in place. This is not a permanent installation, as you can unplug the power cable, slide the dash cam back and store it somewhere else when you're not using it, which I wholeheartedly recommend. That being said, if you want to have it running when your car's parked too, you can get the hardwiring cable.

Or, if the cigarette lighter/12V socket allows for it, you can probably leave the power cable plugged in and your X550 will continue to run while the engine's off. Some cars let you do that, others don't. Either way, if you want to use the X550 while parked, there's a dedicated mode in the settings that you can turn on.

The X550 comes pretty much well set up just the way you'd want to use it out of the box. So, there's not much time that you will be spending in the settings menu, other than to get yourself familiarized with it and, maybe, configure certain features, like the time zone and speed unit.

As the dash cam comes with a 2.7-inch screen, the settings menu is shown right on the device. However, using the Windows or macOS software you can also adjust them from the comfort of your PC. The software also lets you view the videos and see information such as the GPS location that's embedded in them.

When you want to record in a particular mode, it is possible to initiate a manual recording. Normally, the X550 records in continuous mode and stores the video files in the respective folder on the microSD card, but in that case the files will go in a different folder which only holds manual recordings.

The microSD card is set up, by default, so that most of the space goes to continuous recordings, but you can play with this configuration in the settings to devote more space for manual videos. I went with the default configuration, as that made most sense during the review. There are other folders on the microSD card, for parking motion and incident recording.

In case you run into an accident and the microSD card gets damaged, the X550 can record the four seconds prior to the impact and the following two on its internal memory. That feature is called dual save, and is turned on by default. If you run into an accident and the microSD isn't damaged, you'll get an automatic recording of the 10 seconds before it and the 10 after. The sensitivity level can be adjusted in the settings, so if you want to err on the side of caution set it accordingly.

While we're on the topic of settings, there are some options that you may have to adjust, depending on what car you drive and what functionality you want to use. For instance, by default, the X550 is configured for use in a sedan, but you can change it to an SUV or truck. I cannot tell you how those options influence how it works, as I only used it with a hatchback, but Thinkware says that this influences the sensitivity of the driver assistance features.

I did not get to test the parking mode, as I couldn't safely leave the X550 inside the car at all times, but there are two ways that you can have it on. First, you can choose to have the camera only record motion when parked. And, second, you can have it record a time lapse.

Something else that I did not get to test is the speed and red light camera warnings, as there weren't any where I drove. It is worth noting that there are a couple of databases that you can load onto the X550, depending on where you drive. I had the European database, but there is also one for the US, Russia, and New Zealand, among other countries.

The X550 features lane departure warning, road safety warning, forward collision warning as well as front vehicle departure warning. How well do these features work? That depends on a number of factors, like road condition, your driving style, how careful fellow drivers are and so on.

To give you an idea, the forward collision warning, which works over 18mph or 30kph, can be triggered by a car that moved into your lane too close in front of you, by a car slowing down in front of you, or by a big bump in the road. You can play with the sensitivity to tweak it to your preference, but don't expect it to work as well as a sensor that ships with the car.

If you're at a stop sign the front vehicle departure warning will provide an alert four seconds after the car in front started moving. That might come in handy if you're not paying attention. Similarly, if you're not holding your lane, the lane departure warning will let you know. Keep in mind that Thinkware says that these features are not 100 percent reliable, so don't base your driving on them.

During the review, I didn't get into a situation where the driver assistance features saved my bacon, so I cannot tell you just how much of a benefit they provide. You might want to experiment with the sensitivity, like I said before, prior to making your judgment, but it's good to have the safety net there in case something does happen -- even if it's only a rudimentary system.

The dash cam records the sound inside the car, by default, which you may or may not want to be embedded in the video. Personally, I had it on to get a sense of the sound quality and turned it off for the remainder of the test. It may be helpful to keep it on in certain occasions though, like when you're having a conversation or argument with a police officer, another driver or a pedestrian.

It also adds the GPS speed to the time stamp, so you will have that showing in the video too. That can be disabled but, again, there are times it can come in handy as well. I left it on while testing, but remember that it might also be used against you if you drive over the speed limit (which, admittedly, I often do). Now that we've talked about the functionality, let's address video quality. Based on my experience with action cameras, this is an area where you really get what you pay for. There's no escaping that. Quality hardware and optimized software cost money, and that is reflected in the price that you pay, along with other things like updates and support.

The X550 video quality is good during the day and night. You expect it to look good when there's plenty of light, but in low-light it's really nice. Action cameras, due to their narrower aperture lenses (typically f/2.8), struggle here, but the X550 does not. Depending on conditions, you can make out the plate of an oncoming car, for instance. However, when it's really dark, the quality will drop -- which is a consequence of the small sensor (2.19MP, 1/2.9") that's used in these sort of devices.

Video recording is done at 1080p at 30FPS, which is pretty much the norm these days for dash cam videos. The bitrate is just under 11Mbps, which means that an hour of video will require under 5GB of storage space. With the microSD card that's provided in the box, 60.6 percent of the 32GB of storage is allocated to continuous recording, which gives you over three hours of recording time before the oldest files in that folder are overridden.

Thinkware says that the lens gives a viewing angle of roughly 140 degrees (diagonally, so the horizontal field of view is narrower). That has the benefit of making the videos look more stable as you drive over bumps. In fact, there's no shake that I could see under normal driving conditions. The built-in accelerometer might help there, though the manual doesn't say whether it's used for stabilization too.

If you get the rear-view camera, there's a dedicated socket on the main unit to connect it to. When that's done, you'll get synchronized videos from the front and rear units. The X550 is an interesting proposition if you're looking to get a premium dash cam, because it has a compelling feature set and the video quality to match the asking price. It's a quality product.