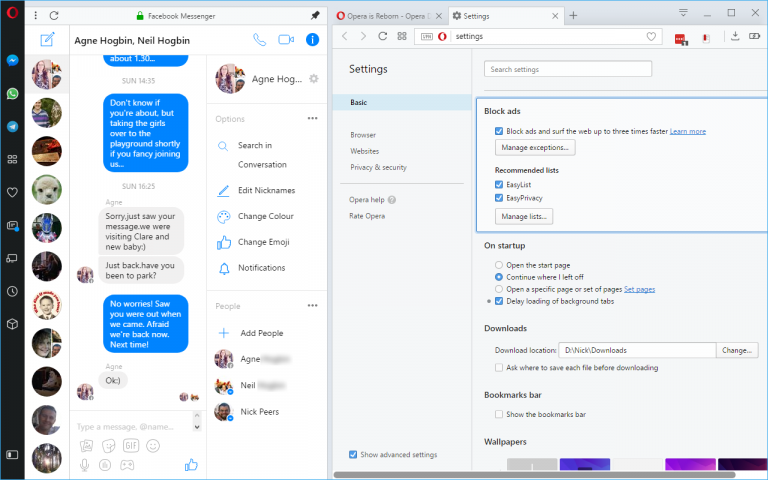 Opera Software has released Opera 45.0 for Windows, Mac and Linux. It’s been codenamed "Reborn" because it’s the first release to include features previewed earlier this year in its concept browser Opera Neon.

These new features include embedded social messaging apps into the pinned sidebar alongside major user interface improvements and tweaks to the browser’s ad-blocking function to make it more configurable.

The major new feature in Opera 45 is found in its newly redesigned sidebar, which can now be permanently pinned to the left-hand edge of the browser window. When pinned, users get access to the headline feature in question: built-in social messaging apps.

In this first release, users can connect to Facebook Messenger, WhatsApp and Telegram. All three services come with their own icons and are built directly into the browser itself: no add-ons or separate app required.

Start by clicking one of the icons -- a pop-up inline window will appear, which users can subsequently pin and resize for permanent access alongside the browser window. After logging in, users can then browse and chat simultaneously.

Users can customize which icons appear in the taskbar (only Facebook Messenger and WhatsApp are visible by default) by going to the Speed Dial and clicking the 'Customize start page' icon).

Opera 45 also includes the first fruits of the Reborn project’s aim of overhauling the browser’s user experience -- again, users can customize these via the 'Customize start page' menu.

First the browser is now available in a choice of two color themes: light (default) and dark. Use the switch to flick between them. A new, more vibrant color wallpaper has been added too -- again users can switch easily from this menu.

The browser toolbar has also been redesigned, with completely redesigned icons. These provide a more consistent user experience across different platforms and have been optimized across a wider range of DPIs to look better on high-def monitors.

The sidebar also has been given a facelift, with animations making it clear when a sidebar icon (or element on the Speed Dial) has been highlighted.

Opera 45 also enhances the ad-blocker, automatically reloading pages as you enable or disable the feature via its Address Bar icon. Users also get to choose which block lists are loaded -- EasyList and EasyPrivacy are switched on by default; regional, customized and other lists can be managed via the Settings button.

Other improvements include warnings for sensitive form fields on non-secure web pages and wider support for using GPU to process certain video to reduce battery consumption and support higher framerates and resolutions.

Opera 45.0 is available now as a freeware download for Windows, Mac and 64-bit Linux users. Existing users can update from within Opera itself -- simply open the Opera menu and choose About Opera to do so.