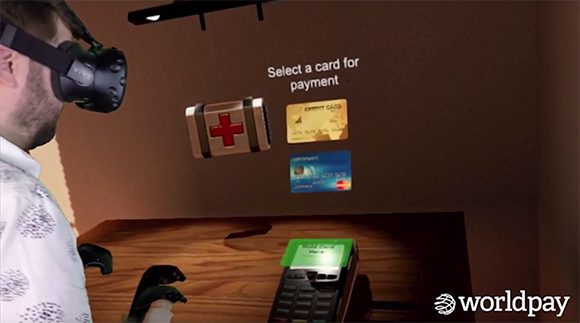 We've all been there. You're testing out your new virtual reality headset, exploring fantastical worlds and immersing yourself in all kinds of 360-degree awesomeness, when you suddenly stop and think to yourself, "If only there was some way I could simulate the process of taking out my credit card and tapping it to complete a purchase."

Well, that will soon become possible if payment processing company WorldPay is successful in getting its new platform accepted by app and game developers.

The solution, revealed in a proof-of-concept video, involves a complete recreation of one of the company's real-world retail credit card terminals, right down to an animation of a (completely useless) paper receipt being generated after a successful purchase. Using a motion controller, you can grab a virtual version of your credit card and tap it on the terminal, just like you would do at an actual store. Of course, the difference is, you don't get to walk away from the transaction with actual physical goods or services -- yet.

However, that line between physical and digital, as with everything in the virtual and augmented reality spaces, will become increasingly muddled. One of the companies WorldPay hopes to bring on board with this concept is Ikea. Last year, everyone's favorite Swedish furniture company released the Ikea VR Experience for the Oculus Rift. It lets you build your own virtual kitchen, getting a sense of the exact real-world dimensions of the company's various fixtures and appliances. It's effectively just a glorified tech demo, but if it gets fleshed out, including integration with WorldPay's system, there could be a day in the not too distant future where you can walk through a full-sized Ikea store, select the items you want, build out everything you need for a home remodel, and walk up to the cash register where you'll pay for everything and schedule delivery... all without actually taking a single step outside in the real world.

Before that happens, though, any kind of short-term rollout of WorldPay's technology will apply to things like unlockable levels or premium items and upgrades in virtual reality games. That is a rather inelegant process today, as you generally either need to load up on in-game currency and items ahead of time via a non-VR interface, or interrupt your VR experience in real time to go out to some kind of payment menu screen. 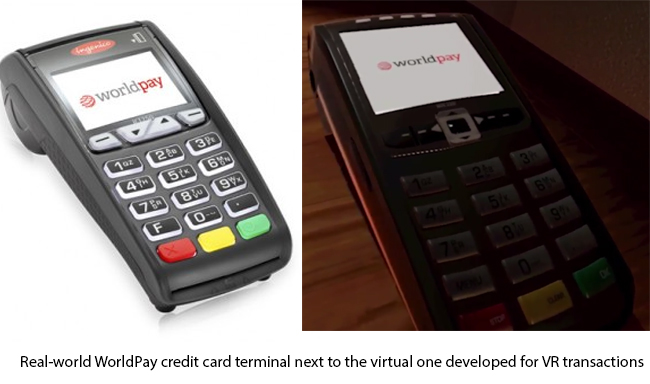 So as crazy and unnecessary as it might seem to create a perfect 3D model of a physical credit card machine just to be able to accept digital payments, this kind of solution is actually exactly what's needed for the burgeoning market of in-VR purchases. As the virtual reality space matures and the technology comes closer to allowing users to achieve "presence" (VR speak for literally tricking your brain into thinking what you're experiencing is real), everything in the environment needs to be fluid and organic.

The virtual reality market will generate some $3.4 billion this year, according to a report this week from research firm IDTechEx, and that number will balloon to between $30 billion and $40 billion by 2027. While primarily a novelty outlet for new video game concepts today, VR is poised to begin making a footprint in nearly every consumer industry. No company should be seen as immune from the impending disruption -- not even retail payment processing companies.