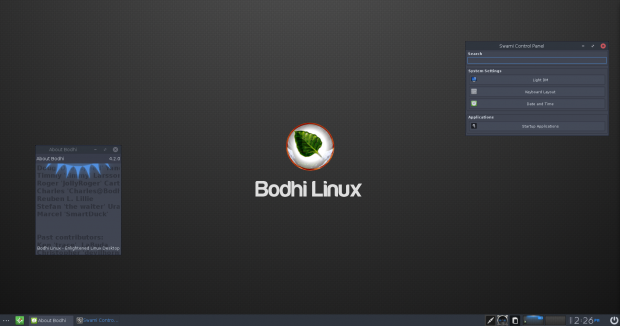 Bodhi is an interesting Linux distribution thanks to its lightweight nature. If you have an older PC that isn't particularly powerful, the operating system could breath new life into it. Unlike some other distributions that are light on resources, Bodhi is not ugly -- its Moksha desktop environment looks rather modern. I highly recommend giving the OS a try.

Today Bodhi reaches version 4.2.0. It is quite the boring release, as there isn't much to it. It is merely a rollup, incorporating many of the updates that were released since the previous stable version, 4.1.0. If you are already running Bodhi and have been installing updates, there is no reason to bother -- this is more for those that aren't already running the OS.

"Today I am pleased to announce the release of Bodhi Linux 4.2.0. This is a normal update release and it comes four months after the release of Bodhi 4.1.0. Existing users do not need to reinstall as the primary goal of this update release is to simply keep the current ISO image up to date. That being said this release does bring a few changes with it. The 64bit releases utilize the 4.10 kernel by default and the Swami Control panel is now installed by default in all the releases," says Jeff Hoogland, Bodhi Linux.

Hoogland also says, "This is the first release in which we are dropping our 32bit PAE discs. I would like to clarify that we are still supporting 32bit computers, but if you need to install the 32bit version of Bodhi Linux the only version we are preparing is our Legacy ISO image. The Legacy image will work on PAE and non-PAE 32bit hardware alike. If your computer needs a PAE kernel to utilize all of it’s memory it is likely better for you to be using a 64bit operating system anyways. If you do feel the need to use a PAE kernel on a 32bit operating system with Bodhi though, you can always install the Legacy release and then change kernels afterwards."

Ready to download? You can get the appropriate ISO here. There are options for both direct downloads and torrents.