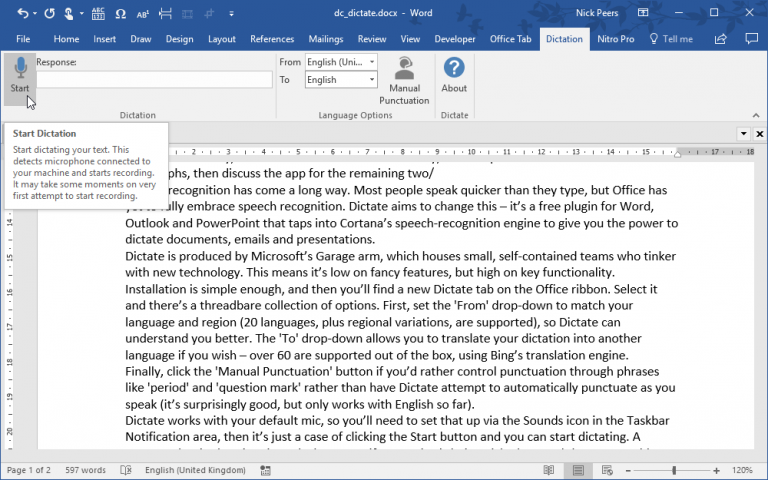 Microsoft Garage -- the Redmond behemoth’s R&D arm -- has released Dictate 5.0, a free add-on for those running Microsoft Office 2013, 2016 or 365 on Windows 8.1 or later. Also available for 64-bit versions of Office, Dictate brings dictation capabilities to Word, Excel and PowerPoint.

The app uses the same speech recognition engine found in Cortana to convert user speech into editable text using whatever microphone has been configured as the user’s default.

Microsoft reveals the idea originated from a hackathon project, and has been used internally at Microsoft by over 1,500 employees spanning 40 countries.

Speech recognition is already built into Windows, but Dictate targets Office specifically, and boasts two particularly interesting features: the ability to translate spoken words to another language, for example, plus an option to use spoken commands to insert punctuation and perform basic editing functions, like start a new line (speak "New line") or delete the last line of text ("Delete").

Installation is simple enough -- after relaunching Office a new Dictate tab will appear on the Office ribbon. Select it and there’s a threadbare collection of options. First, set the "From" drop-down to match your language and region (20 languages, plus regional variations, are supported), so Dictate can understand you better. The "To" drop-down allows you to translate your dictation into another language if you wish -- over 60 are supported out of the box, using Bing’s translation engine.

Finally, click the "Manual Punctuation" button to trigger voice-controlled punctuation support such as "Question mark" or "Comma" -- note that this currently only works with English.

Dictate works with your default mic, so you’ll need to set that up via the Sounds icon in the Taskbar Notification area, then it’s just a case of clicking the Start button and you can start dictating. A response bar in the Dictation tab shows you if your voice is being picked up, and then reasonably quickly your spoken words will start to appear within the document or email.

Future development and support is uncertain due to Dictate’s status as an experimental Garage project. Dictate 5.0 for 32-bit Office and Dictate 5.0 for 64-bit Office are both available now as free downloads for PCs running Windows 8.1 or later, Office 2013 or later, and the .NET Framework 4.5.0 or later.

2 Responses to Free Dictate add-on allows you to, well, dictate to Microsoft Office