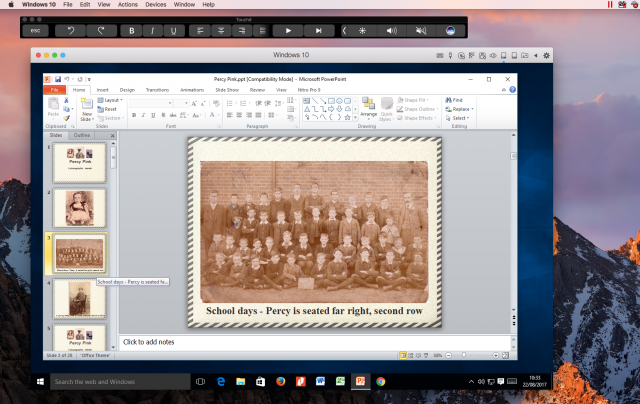 Performance improvements include faster access to Windows files and documents (a speed increase of just under 50 percent), plus quicker transfers for large files over USB 3.0 and Thunderbolt -- in the case of external Thunderbolt SSD devices, those transfers will be up to 100% quicker than in Parallels Desktop 12.

One headline new feature is support for the MacBook Pro’s Touch Bar (as well as Touché, a software emulator for other Macs). This is context-sensitive -- displaying Taskbar icons when at the Windows desktop, but providing useful shortcuts when certain apps, such as office software and web browsers, are running. Users can also choose from a limited selection of custom shortcuts for any app they choose.

When Windows 10 Fall Update is released, users will be able to integrate the People Bar from their virtual machines into the Mac desktop by placing favorite people in the Dock. All Fall Update features will be supported by virtual machines, along with forthcoming macOS High Sierra updates.

Other user improvements include Picture-in-Picture, a way of monitoring multiple virtual machines through thumbnail-sized screens that remain on top of all other windows and update in real time. The app icon and user interface have also been updated to fit better in with the forthcoming maCOS High Sierra desktop.

Parallels Desktop 13 is available now as a trial download for Macs. The Standard edition is available for a one-off price of $79.99 ($49.99 upgrade from version 12), while a Pro edition with additional features and support for more powerful virtual machines (up to 32 virtual CPUs and 128GB vRAM as of version 13) can be purchased for $79.99 a year. Standard users can upgrade to the Pro edition for $49.99 for the first 12 months.