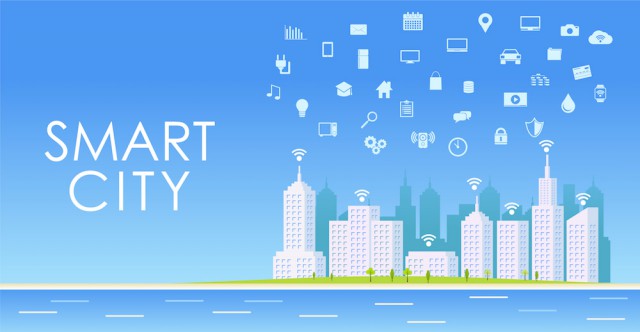 Global analyst firm Gartner has predicted that by 2020 there will be more than 20 billion "things" connected to the Internet, sending data all over the world. These Internet of Things (IoT) devices could be anything from fish tanks and fidget spinners, to sunglasses, fridges and other home appliances. All these devices have the ability to send and receive data between one another, creating a network that can share valuable information.

When such devices are integrated into the infrastructure of our towns and cities, they have the potential to revolutionize the way we live our lives -- making our cities more accessible, safer and easier to navigate. For fleet and operations managers in particular, this presents a very enticing opportunity.

The rise of smart cities

Smart cities use Internet-connected devices and sensors to analyze information across the infrastructure. They can gather data on road conditions, weather and even the flow of the traffic. This naturally can provide local authorities with a great deal of useful information in order to help them do their jobs more effectively.

For example, road sensors can detect if an area needs maintenance urgently, allowing them to judge which jobs ought to take priority over others. Over a longer term, they might even be able to analyze whether a particular intersection could benefit from an additional traffic light or zebra crossing. Another possibility is using traffic sensors to enable transit authorities to customize traffic light schedules (yes, just like in The Italian Job) or speed limits based on the data collected to enable smoother journeys for all road users.

Two main technologies underpin the development of smart cities. The first is improved access to high speed Internet and cellular networks. The advent of 5G with even faster data transfer speeds across cellular networks will allow communication among a multitude of different devices to become more efficient. This is important as the data from connected devices is only valuable if it is received almost instantaneously.

The second is the rise of more affordable and streamlined sensors. Not only are the sensors becoming more advanced in terms of their capabilities, but they are also getting smaller. Currently, sensors are approximately the size of a hockey puck or smaller -- soon, they may very well be almost invisible to the human eye, allowing for easier integration into our infrastructure. By interacting with a variety of other IoT devices, such as cars, mobile phones, and even fitness trackers, they can exchange information about the status of road networks or other infrastructure.

The benefits which smart cities can bring to fleets are enormous. Currently, our technology can already monitor data within a vehicle or piece of heavy equipment -- its speed, engine hours, idling time and other driver behavior. But imagine the possibilities when vehicles are connected to the entire infrastructure network.

Sensors monitoring road and weather conditions could provide real time updates on any potential dangers -- for example, if there was black ice on a particular road during the winter, or if there had been a major accident on the usual route. Having fed this data back into the fleet vehicles, the technology could then suggest a better alternative in order to remain safe and reduce journey times. This would in turn help fleet managers with compliance processes and risk mitigation and ultimately become more efficient while also cutting costs.

Another major benefit will lie in locating parking spots. No more wasted time and fuel driving around in endless circles, trying to find an empty space -- especially one large enough to accommodate a lorry or other sizable commercial vehicle. Smart sensors, however, could have an overview of the entire network, and be able to quickly detect which parking spots were free and which were not, and instantly direct a driver towards the closest option. This maximizes uptime, and cuts down on both pollution and fuel consumption. It could also reduce the temptation for drivers to park on double yellow lines after a fruitless search for somewhere to pause.

Smart cities around the world

Smart cities are, in fact, rising all over the world. Barcelona has already used technology to improve their bus system, which has allowed authorities to optimize routes and schedules based on live data -- just imagine how convenient it would be if the digital displays found at bus stops were actually accurate.

The idea of a partially automated vehicle no longer seems the distant dream it once was either. Already, driverless buses, which previously had been trialed in Greenwich in London, have also recently made a debut in Tallinn, Estonia. Further afield in Singapore, many governmental departments already use a variety of IoT sensors to improve their public transportation network, publicize vacant parking spots, and even provide up-to-date information on flood levels. Furthermore, they have also used Robocars, which was one of the first public trials of self-driving cars.

Smart cities have the capability of improving our day-to-day lives at every level -- from relatively trivial concerns over a speedier search for parking spaces or less congestion, to potentially preventing natural disasters with flood detection systems. For businesses, better infrastructure powering smart cities will make them more accessible for vehicle fleets, resulting in opportunities for savings.

Supercharging fleets with IoT and MRM

There’s no doubt that increased connectivity can help make cities smarter, safer and easier to navigate. In order to fully tap into the potential that smart cities offer, businesses will need a software platform that allows them to access the data gathered and analyze it appropriately.

This is where Mobile Resource Management (MRM) software comes in. By using mobile and the cloud to connect all the relevant individuals, from the back-end manager to the fleet driver and everyone else in between, MRM allows them all to communicate and work with the information provided by the smart sensors. This in turn results in improved driver safety, greater efficiency, lower risks and better compliance, enabling companies to optimise their operations, and deliver greater results for customers and the enterprise.

2 Responses to How Internet of Things supports smart cities