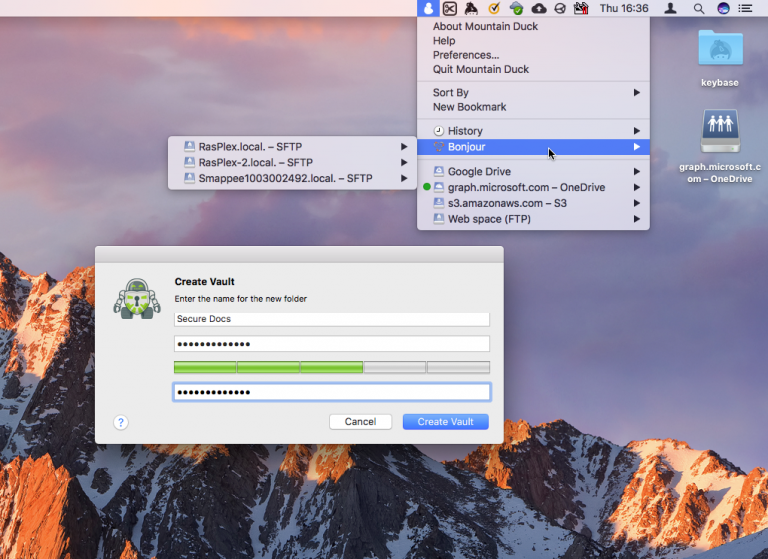 Bern software developer iterate GmbH has released Mountain Duck 2.0 for Windows and Mac. Mountain Duck is designed to make it easy for users to mount server and cloud storage through File Explorer and Finder.

Supported services include Dropbox, Google Drive, OneDrive, Microsoft Azure and Amazon S3, along with OpenStack Swift, WebDAV and FTP hosting. Users can even use the service to browse and encrypt folders stored locally.

The feature is made simple by users simply right-clicking a folder and choosing 'New Encrypted Vault' before providing a passphrase (Mac users must first enable the Mountain Duck extensions via System Preferences > Extension > Finder).

Also new in version 2.0 is an Info panel, which is also accessed through the context menu. From here users gain service-specific features such as changing permissions for files on FTP or SFTP, ACLs on Amazon S3, Microsoft Azure and Backblaze B2, and changing metadata on selected services.

Mountain Duck 2.0 is available as a free trial download for PC (Windows Vista or later) or Mac (OS X 10.8.3 or later). The full version costs $39 for one user, with upgrades from previous versions starting from 40 percent and rising to 100 percent depending on date of purchase.

One Response to Mountain Duck 2.0 adds support for client-side encryption of cloud storage