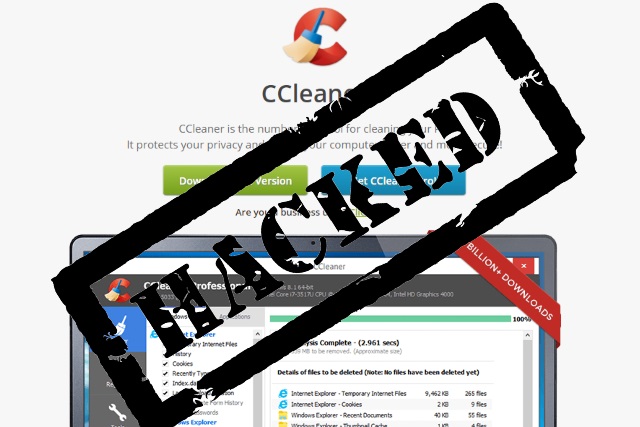 Users of cleanup, privacy and optimization tool CCleaner are being warned to update their software after it emerged the tool was compromised by hackers. Security researchers at Cisco Talos say that there are a "vast number of machines at risk."

CCleaner is produced by Piriform, now a subsidiary of security firm Avast, making the compromise not only serious, but also embarrassing. With 2 billion downloads -- a number that's rising at a rate of 5 million per week -- the software was targeted by hackers who added a backdoor that could be used to download malware, ransomware and keyloggers. The problem is being compared to the NotPetya ransomware threat.

Cisco Talos noticed suspicious activity on 13 September, finding that "for a period of time, the legitimate signed version of CCleaner 5.33 being distributed by Avast also contained a multi-stage malware payload that rode on top of the installation of CCleaner."

While Talos says that a large number of computers were put at risk, Piriform thinks otherwise. In a statement on the site, vice president Paul Yung says:

We would like to apologize for a security incident that we have recently found in CCleaner version 5.33.6162 and CCleaner Cloud version 1.07.3191. A suspicious activity was identified on September 12th, 2017, where we saw an unknown IP address receiving data from software found in version 5.33.6162 of CCleaner, and CCleaner Cloud version 1.07.3191, on 32-bit Windows systems. Based on further analysis, we found that the 5.33.6162 version of CCleaner and the 1.07.3191 version of CCleaner Cloud was illegally modified before it was released to the public, and we started an investigation process. We also immediately contacted law enforcement units and worked with them on resolving the issue. Before delving into the technical details, let me say that the threat has now been resolved in the sense that the rogue server is down, other potential servers are out of the control of the attacker, and we’re moving all existing CCleaner v5.33.6162 users to the latest version. Users of CCleaner Cloud version 1.07.3191 have received an automatic update. In other words, to the best of our knowledge, we were able to disarm the threat before it was able to do any harm.

He goes on to provide a technical description of the compromise, and says: "we don't want to speculate how the unauthorized code appeared in the CCleaner software, where the attack originated from, how long it was being prepared and who stood behind it."

The presence of a valid digital signature on the malicious CCleaner binary may be indicative of a larger issue that resulted in portions of the development or signing process being compromised. Ideally this certificate should be revoked and untrusted moving forward. When generating a new cert care must be taken to ensure attackers have no foothold within the environment with which to compromise the new certificate. Only the incident response process can provide details regarding the scope of this issue and how to best address it.

Interestingly the following compilation artifact was found within the CCleaner binary that Talos analyzed:

Given the presence of this compilation artifact as well as the fact that the binary was digitally signed using a valid certificate issued to the software developer, it is likely that an external attacker compromised a portion of their development or build environment and leveraged that access to insert malware into the CCleaner build that was released and hosted by the organization. It is also possible that an insider with access to either the development or build environments within the organization intentionally included the malicious code or could have had an account (or similar) compromised which allowed an attacker to include the code.

It is also important to note that while previous versions of the CCleaner installer are currently still available on the download server, the version containing the malicious payloads has been removed and is no longer available.

Both Piriform and Talos advise CCleaner users to ensure that they update to version 5.34 of the program. The slight snag here is that the free version of the program does not include an auto-update function, so users will have to manually download the updated version.