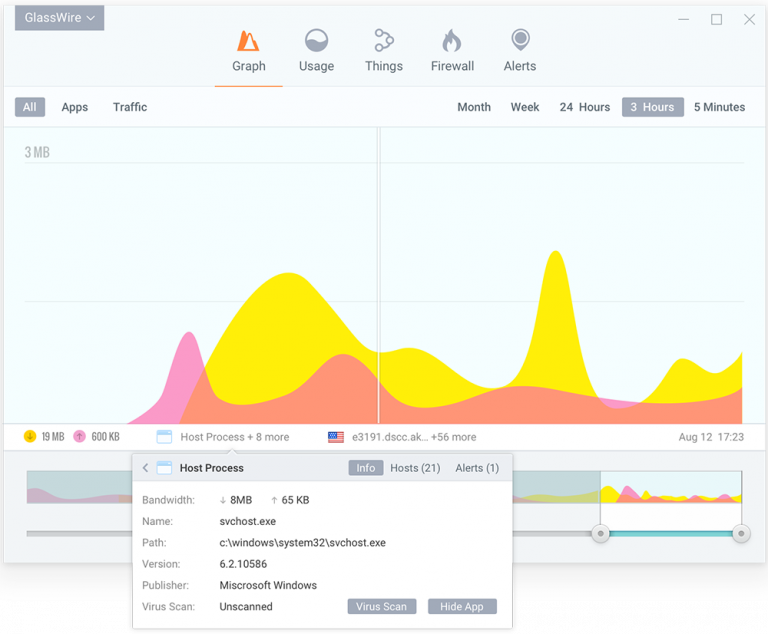 The app, which comes in free and paid-for versions, unveils new features including support for firewall profiles and access to VirusTotal for scanning network-related files. It also unveils a major new redesign and provides users with more granular control over key aspects of the program.

GlassWire can work on two levels: if you already have a third-party firewall installed, such as Norton or ZoneAlarm, then it functions as a basic network security monitor. If you’re relying on the built-in Windows Firewall, however, then GlassWire can offer additional protection by giving users user-friendly controls for using it to -- among other things -- block connections.

Version 2.0 opens with a complete redesign along with HiDPI monitor support.

The Usage screen now makes it easier for users to change the interval settings between day, week, month or custom.

Users also gain access to VirusTotal’s API, allowing them to analyse network related files for possible malware, plus gain the ability to toggle the "Things" network scanning feature on or off as required.

Remote connections can be established via hostname as well as IP address.

Paid-for users gain access to a Firewall Profiles option via the Firewall tab -- aimed at laptop users, it allows them to quickly switch between profiles according to location, such as home or public Wi-Fi hotspot.

Also added to the paid-for edition is a "Wi-Fi Evil Twin Alert", which protects users from Wi-Fi "pineapple" attacks by notifying them if a known Wi-Fi access point becomes unprotected or its MAC address is changed.

GlassWire 2.0.78 is available now as a free, function-limited download for PCs running Windows 7 or later. A seven-day trial of paid-for features is included in the download. These features include "Ask to Connect", "Lock down mode", "Mini graph mode", support for firewall profiles, longer graph history, multiple server monitoring and additional Wi-Fi monitoring features. Prices start from $39 per year for a Basic subscription covering one PC, and version 2.0 is a free upgrade for version 1.0 users.