Star Wars fever is once again high as The Last Jedi arrives in cinemas around the world. Sphero offers a range of Star Wars droids -- R2-D2, R2-Q5, BB-8 and BB-9E -- which you can control via an app, and which also interact with one another.

The BB-8 model I’ve been testing for a few weeks now is a perfect scaled down version of the orange and white droid first introduced in The Force Awakens. Like most of Sphero’s robots, it’s a gyroscopic ball that rolls around, but with a dome on top that moves independently.

BB-8 comes in a sturdy cardboard box, with a sleeve, and there’s a quick start guide inside as well as an inductive charging base. Getting started is just a matter of connecting the charger to a USB port using the supplied Micro USB cable, then putting BB-8’s dome on top of his body and placing him on the charger. He will spring to life, his body flashing while his head moves around.

While that’s going on, the next step is to head to starwars.sphero.com to get the free app for Android, iOS or Windows 10.

Once installed, launch the app, enter your age when prompted, and agree to the terms of service. The app will automatically connect to BB-8 and update the firmware if required.

There are a lot of activities to choose from, but the first thing you’ll probably want to do is just drive BB-8 around. Use the app controls to aim him (the blue light on his body needs to face you) and the virtual joypad to steer him around. You can also issue commands by tapping on some buttons. These cause the tiny droid to perform a number of characterful actions, such as looking all around, and nodding or shaking his head.

The Message section is probably the most interesting activity on offer. It lets you record and view holographic messages in the app. Once you’ve recorded a video, point your phone or tablet at BB-8 and you’ll see him project it into the room. It’s a nicely done slice of augmented reality, as you can see below. 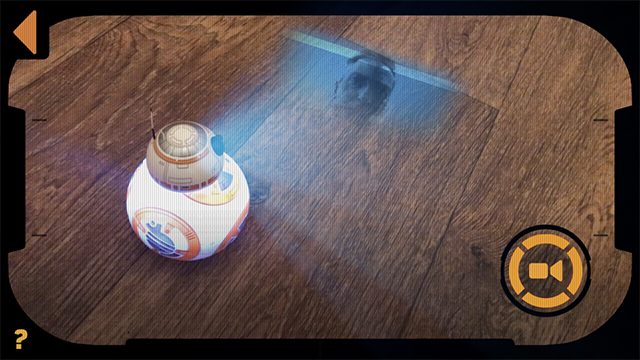 Patrol mode sends BB-8 out on his own, and he reports back sensor data in real-time as he does so. You can view details such as acceleration, patrol distance, tracking system, gyro balance, internal temperature, event log, chronometer, acceleration mapping, gyro stabilization, and more.

Draw and Drive lets you draw paths for BB-8 to follow, while Watch With Me lets you watch Star Wars movies with the droid. You will need a copy of The Force Awakens or Rogue One for this.

If you have a Force Band, you can use this to control the droid, and the Settings menu lets you configure different elements, such as Droid Sounds and Music. BB-8 doesn’t make any sound himself, all audio comes through your phone or tablet.

There are lots of smart touches worth mentioning -- BB-8 recognizes and responds to your voice, although he also has a mind of his own, as well as a personality that evolves as you interact with him.

The Sphero BB-8 App-enabled Droid is available to buy from Wellbots, priced at $128.99 with free shipping in the US. You can currently get 10 percent off the price of the droid (and other Wellbots products) using code XMAS10.