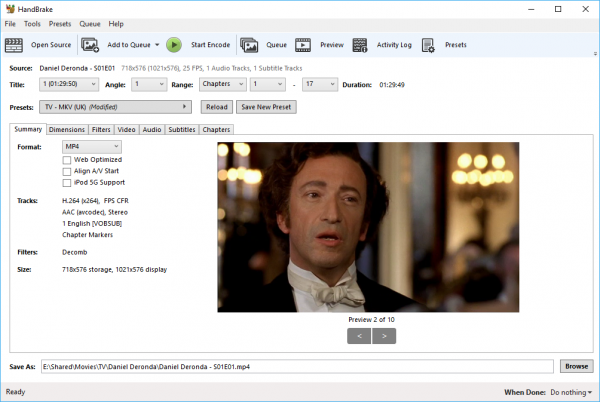 Popular cross-platform, open-source video transcoder Handbrake 1.1.0 has been released, and despite the version number increment is actually a major update. Handbrake allows users to convert video from a wide variety of formats -- including DVD and Blu-ray -- into MP4 or MKV files with support for a wide range of codecs, including x264, x265, VP8/9 and both MPEG-2 and MPEG-4.

Handbrake 1.1.0 provides a major update to its user interface to provide a more logical and easy to follow workflow. It also adds new presets, filters and improves 4K and x265 support.

The most visible change -- of course -- is to the user interface. On launching the program users are encouraged to drag and drop files into the main program window in addition to selecting a source.

Presets have been moved to a new dropdown menu beneath the Title, although the addition of a Presets button allows users to toggle the old right-hand sidebar if they prefer.The user interface itself has had a facelift with new icon designs that are more than superficial -- they now support high-resolution displays. It's also been redesigned to be more logical and consistent, with the workflow now moving top to bottom, left to right.

Beneath this, the old Pictures tab has been renamed Dimensions. A new Summary tab has been added where the Format dropdown menu now resides alongside a built-in preview and quick summary of what's been selected in the other tabs.

Windows users also gain options for running Handbrake in portable mode and see the reintroduction of an option to set custom anamorphic sizes in the Dimensions tab. Audio selection controls are now context-aware and range limited with better default choices.

Users gain two new filters: Unsharp and Laplacian LapSharp sharpening. x265 10- and 12-bit encoders are also included by default. A large number of third-party libraries have also been updated -- a full list along with the complete list of changes can be found here.

Users are reminded that custom presets will be lost if upgrading from a version of Handbrake older than 1.0.0 -- given the previous version was 1.0.7, most users should not be affected by this. However, any pending encodes in the Queue will be lost after updating, so clear or complete these first.

Handbrake 1.1.0 is available now as a free, open-source download for Windows, Linux and Mac. Recommended system requirements include a 64-bit Intel Mac running OS X 10.7 or later, or Windows 7 or later. Support for both Ubuntu 17.10 and the upcoming 18.04 have been added with this release.