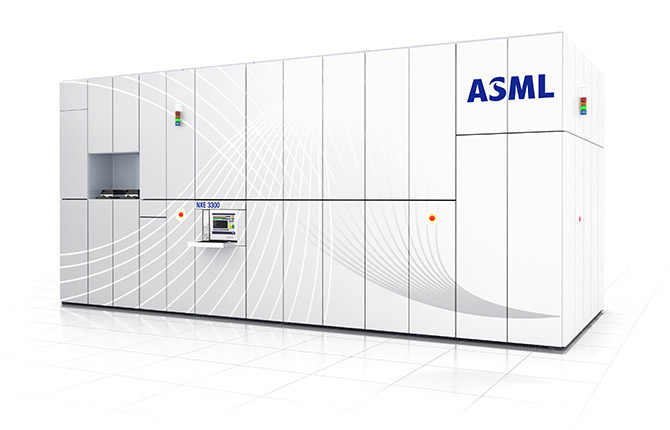 Technology progresses quickly. In large part, that’s due to semiconductors, which power everything from computers to toasters.

As semiconducting components become more advanced, they get smaller and more powerful. This, in turn, enables electronic products to become smaller, more powerful and more cost-effective. One company, which has long been a leader in the semiconductor business, recently introduced a unique machine that takes microprocessor production to the next level.

Dutch firm ASML recently introduced a new machine for manufacturing microprocessors that helps make them even smaller and more powerful.

The machine uses extreme ultraviolet (EUV) light to essentially print designs onto microchips. It first projects the EUV through a blueprint. Then, a series of optics, manufactured by the German company Zeiss, reduces and focuses the light onto a piece of silicon, which has a coating made from a light-sensitive chemical.

When the EUV interacts with this chemical coating, it imprints the pattern onto the silicon wafer. The machine then removes excess silicon, leaving a three-dimensional structure.

The process gets repeated numerous times. The result is a grid of hundreds of highly precise chips printed on a single piece of silicon.

The machine must operate in a vacuum, so that air does not interfere with the light. The parameters are so tight that even a single speck of dust could ruin the chips.

ASML, which has its headquarters near the Belgian border in Veldhoven, was founded in 1984 and has since been persistently advancing the semiconductor industry by enabling smaller and more precise designs. The company builds lithography machines used by companies from Intel to Samsung to Taiwan Semiconductor Manufacturing, which supplies Apple.

The machines, despite producing tiny microchips, are about the size of a bus. ASML needs three Boeing 747 aircraft to ship them to a client.

ASML is one of only three companies that make lithography machines and the first to develop EUV technology.

ASML's EUV technology enables microprocessor manufacturers to produce to even tighter tolerances than ever before.

They can fit more circuits, and therefore more capabilities and power, into a single component. The machine works quickly and efficiently, meaning that manufacturers can produce boards cost-effectively on a large scale.

The use of this advanced technology means that the electronic devices these components are made for can be more powerful and include more functionality, while still reducing their size and maintaining cost-effectiveness.

This type of progress is critical to the continued advancement of technology. Increasing proportions of the products we use contain microchips, printed circuit boards (PCBs) and other components. These components enable the internet of things (IoT) and artificial intelligence capabilities that are playing a growing role in society.

ASML predicts that it will continue to sell more of its EUV machines. These forecasts are likely accurate, meaning that the advanced products EUV technology enables will become more common.

Then again, technological progression can be unpredictable. It's possible that even more advanced machines could enter the picture sometime in the relatively near future.

Other technologies, such as 3D-printed technology and flexible PCBs, will likely continue to play a growing role as well. Furthermore, electronic devices and the components that drive them will continue to integrate more capabilities and be capable of more power and speed, while simultaneously becoming smaller and more cost-effective.

This will result in electronic devices becoming increasingly prevalent in our daily lives.