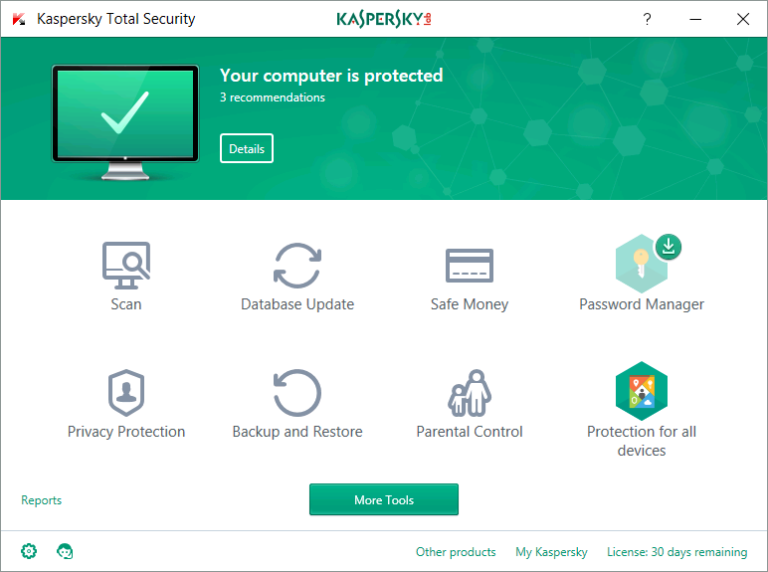 The suite -- which is also available (but not yet updated) on the Mac -- concentrates on improving and refining existing components, with highlights including support for removing troublesome applications and browser extensions.

Kaspersky, which relocated its data processing centres to Switzerland after concerns about its ties to Russia, has focused on improving existing application components with this new release.

This is immediately apparent when opening the Tools window, which now categorizes application features to aid navigation.

The PC Cleaner component now supports a search-and-remove component for browser extensions, plus gives users the ability to complain about applications that misbehave.

Complementing these new features are an added scheduler for searching for both apps and browser extensions within the Application Manager, which provides a new option for excluding applications based on their object category. The list of ignored apps now resides in its own window. Similar improvements have been implemented in the Software Updater section too.

Kaspersky’s Safe Money component, which promises added protection when using online banking or shopping, has also been improved. Users can now open a specific site in Protected Browser mode by clicking the app icon in the Notification area and on the taskbar. A notification indicating if hardware virtualization is supported has also been added, while its status can be found in the component settings window.

Other improvements include the addition of new Anti-Banner filters, better notifications, a redesigned Recommended settings window and the ability to scan scripts using the standard Microsoft Antimalware Scan Interface (AMSI). The scanning of encrypted connections has also been improved.

Kaspersky Total Security 2019 is available now as a free trial download for PC. Also available is Kaspersky Internet Security 2019 for PC, and Kaspersky Security for Mac 2018. EU citizens can enjoy huge discounts on Kaspersky products at the Downloadcrew.co.uk Software Store.