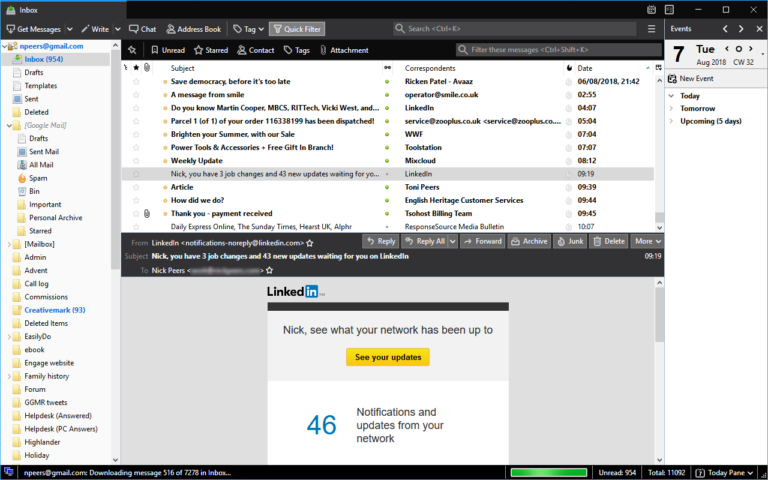 Version 60 unveils a new look -- named "Photon", along with newly designed light and dark themes. Elsewhere it now adds support for WebExtension themes, plus makes substantial improvements to various elements including the calendar and attachment management.

The headline new feature is the updated look and feel, which has been designed to mirror that found in Firefox Quantum. The new Photon design includes square tabs, a togglable title bar and an updated logo.

It also ships with new dark and light themes as default, allowing users to change the look and feel to reflect their own desktop. Numerous new themes for the program’s chat component have also been added.

One major underlying change is the shift to exclusive support for WebExtension themes, mirroring the recent switch in Firefox. This means existing add-ons may no longer work, so users should check to see if updates have been released before upgrading.

There are numerous improvements to existing features. The attachment management tools include the ability to drag-and-drop attachments to reorder them, the shift of the Attach button to the right of the window and an Alt+M keyboard shortcut for toggling the attachment pane.

The Calendar is now bundled with Thunderbird by default, although users are given the option of disabling the underlying Lightning extension on first upgrading. It now supports copying, cutting or deleting selected occurrences or entire series for recurring events. Users also gain options for displaying locations for events in both day and week views.

A wide range of further changes -- from support for dismissing reminders from read-only calendars to allowing the setting of a default Address Book -- can be read at the Mozilla Thunderbird support site.

Thunderbird 60 also sees support for Windows XP and Vista dropped -- users of these depreciated platforms must remain with the last major release (Thunderbird 52).