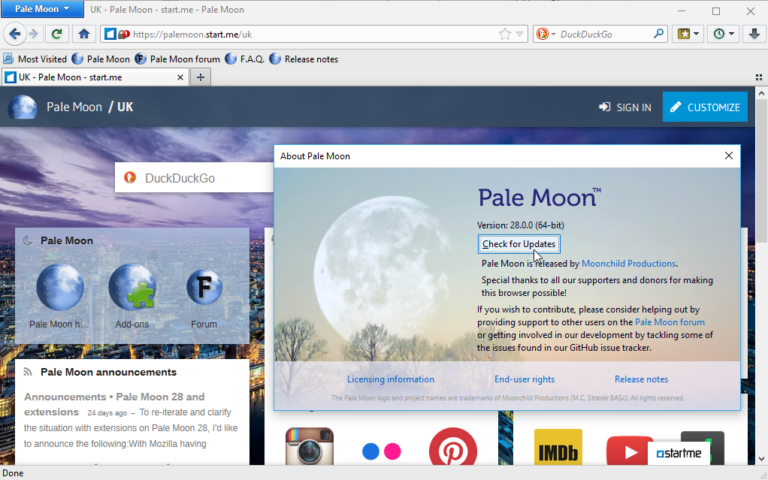 The new build unveils the fourth iteration of its own browser rendering engine, Goanna, which was first adopted back in 2016. There are also major updates to its JavaScript engine, media backend as well as newly introduced support for the WebGL2 standard.

Although based on Firefox, Pale Moon was forked several years ago to focus on its own development. There are virtually no visual or obvious changes in this new major build, but the under-the-hood changes are both extensive and necessary.

The latest iteration of its own browser rendering engine -- Goanna -- remains based on Firefox’s old Gecko engine and promises improved compatibility with what it dubs "trendy" CSS styling techniques such as CSS Grid.

The JavaScript engine -- SpiderMonkey -- has been upgraded to support all landmark features carried by mainstream browsers, which Moonchild hopes will bring an end to increasing issues with JavaScript that have been encountered by users.

In addition to DOM enhancements, there are improvements to media thanks to the effective completion of the media backend. MSE for MP4 streaming should now be compatible with all major players, although MSE for WebM is currently disabled by default (but can be switched on) due to some stubborn compatibility issues that require ironing out. FLAC-encoded audio is now also supported.

There’s also added support for the WebGL2 standard, a refresh of the browser’s Devtools with additional categories for inspecting and manipulating web content and updates to the login manager, allowing login credentials to be stored without a username amid other improvements.

Despite all the updates, Moonchild is keen to stress certain things haven’t changed -- unlike Firefox, for example, Pale Moon continues to support NPAPI plugins, complete themes and a fully customizable user interface. There is also no DRM built into the browser, although third-party plugins such as Silverlight are supported.

It will also continue to work with certain "legacy" plugins of the type abandoned by Firefox. However, as per a recent forum posting, only those plugins that explicitly support Pale Moon can be considered as supported. All other extensions are used at the user’s own risk.