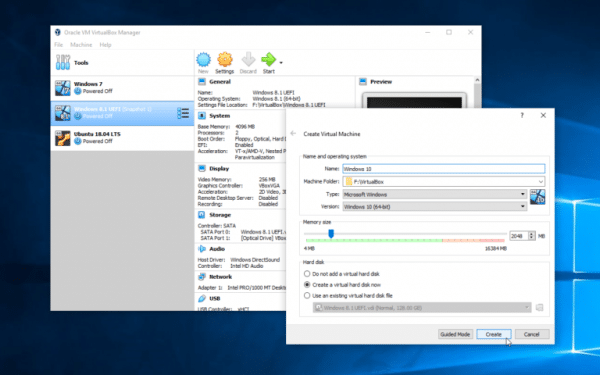 Oracle has released VirtualBox 6.0, a major new release of its free virtualization tool for Windows, Mac and Linux.

Version 6.0 unveils major improvements to -- and a redesign of -- the user interface, plus beefs up 3D support (including first-time support on Linux and Solaris guests). Hyper-V emulation is now also supported on Windows as a fall-back execution core helping fix problems running 64-bit guests when Windows Security’s sandboxing feature was enabled.

The user interface is the chief beneficiary in VirtualBox 6.0. It opens with greatly improved HiDPI and scaling support, along with the promise of better detection and per-machine configuration.

It’s also been subject to a major redesign with the aim of making application and virtual machine setup both simpler and powerful.

The user interface also gains a new file manager tool, which allows the user to control the guest’s file system to transfer files to and from the host.

Support has also been added for using Hyper-V as a fall-back execution core on Windows hosts – this allows 64-bit virtual machines to run when Hyper-V is being used elsewhere, most notably Windows Security’s new Application Guard feature for Edge. Users are warned that performance will be reduced when this fallback is utilized, however.

Other new features include support for exporting virtual machines to Oracle Cloud Infrastructure, plus added vbox-img support for Apple Mac, allowing host machines to access the content of guest disks.

The new build also comes with major fixes and minor additions -- for example, users can now separately enable audio and video recording, while Guest Additions has improved its shared folder auto-mounting system. A full list can be read at the VirtualBox changelog.

VirtualBox 6.0 is now available as a free open-source download for Windows, Mac and Linux, along with the companion VirtualBox Extension Pack 6.0, which is free for non-commercial use only.