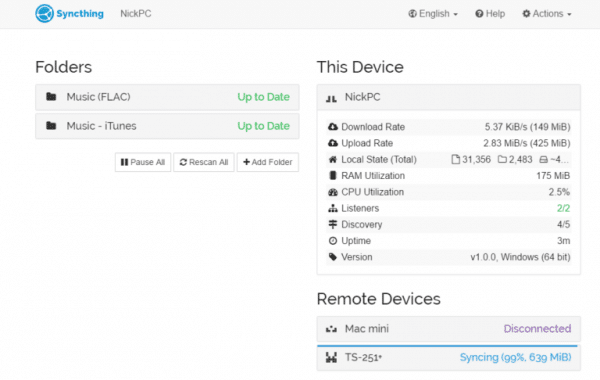 If you’re looking for an open, trustworthy and decentralized alternative to cloud sync platforms, then Syncthing is the tool for you. And today is a milestone -- after five long years in beta, Syncthing 1.0.0 (32-bit) and Syncthing 1.0.0 (64-bit) has been released for Windows, Mac, Linux and Android.

The new release has been given a new code name: Erbium Earthworm, continuing the tradition of alphabetic code names (the previous release was Dysprosium Dragonfly). It’s also been dubbed "Graduation Day" by lead developer Jakob Borg.

Although Syncthing has reached a milestone release, it’s not down to any major new features. Indeed, version 1.0.0 is identical to the 0.14.55-rc.2 release candidate, which immediately precedes it.

That update offered three minor bugfixes, including one where the event system could cause a deadlock. Four enhancements have also been implemented, including an option to limit the maximum number of simultaneous scans, new hardening options for system units, plus the display of any configured rate limits in the GUI and a list of locally changed files for any folders set to only receive changes from other peers.

The decision to bump to Syncthing to a stable release comes from lead developer Borg’s realization that the application is now over five years old, and should no longer be considered unsuitable for production use given each previously 'stable' beta release gets over a million downloads from GitHub alone.

Although the application moves away from being in a perpetual state of beta, Borg is keen to stress that "the journey of development continues".

For those unaware of what Syncthing is, it’s a personal sync tool that emulates the function of cloud backup services in simplifying a user’s ability to keep folders in sync across multiple computers, mobiles and other devices, whether they’re on the same network or spread across the wider internet.

The key difference between Syncthing and other cloud providers is that there is no central repository. Data is transferred directly between clients using P2P technology, which -- thanks to built-in encryption -- ensures it’s never in the hands of a third party.

You can download -- and read our review of -- Syncthing 1.0.0 64-bit here. Those wishing to run Syncthing on older 32-bit machines should click here for the relevant download links. Syncthing runs on Windows, Mac OS, Linux, Android and various NAS drives. It supports a wide range of chip architecture, including i386, x64 and ARM.