The following is an exclusive excerpt from Project to Product: How to Survive and Thrive in the Age of Digital Disruption with the Flow Framework by Dr. Mik Kersten:

Entering the BMW Group Leipzig plant in Germany is an awe-inspiring experience. My hosts are Rene Te-Strote and Frank Schäfer. Frank is a plant manager responsible for overall vehicle integration. The enormous Central Building was designed by architect Zaha Hadid, who designed some of the most unique buildings of our time. The unapologetically sci-fi architecture invokes the feeling of walking into the future. The most prominent sight upon entering is an elevated and exposed section of the production line that towers high above eye level. Car bodies move across a suspended conveyor and then slowly disappear out of view as they glide over a sea of desks. The production line is visible to anyone who enters the building and to all the staff, and the entire building is designed around it. Every part of the building has some practical aspect related to manufacturing and value delivery. Everything embodies the maturity and scale of one of the masters of the Age of Mass Production.

Gene Kim, a mentor and coauthor of The Phoenix Project: A Novel about IT, DevOps, and Helping Your Business Win and The DevOps Handbook, once told me that we may only be 2 percent of the way there in the maturity of DevOps adoption. This statement shocked me, but it also explained so much in terms of the glacial pace with which many traditional businesses move through the Age of Software. It’s the slow rate of progress across the industry that is even more disconcerting than the 2 percent number itself. I became motivated to see firsthand what the culmination of the Age of Mass Production looked like so that I could extract every ounce of learning from it and apply those concepts to the Age of Software.

A year prior to my visit to the Leipzig plant, the BMW Group celebrated its hundred-year anniversary with the "Next 100 Years" event, which recognized the past century of manufacturing excellence and presented the BMW Group’s vision for the future of mobility. The event began with a quote from Alan Kay, of Xerox PARC fame, stating that, "the best way to predict the future is to invent it." What struck me most was just how different the next hundred years would be from the last.

The automotive industry is currently at an inflection point, where software-based innovation is starting to overtake the incremental gains in engine performance and other physical aspects of the car experience.

In 2017, the market cap of Tesla overtook Ford. Investors were betting big on the yet-unrealized potential for change embodied by Tesla, given that in 2016 Tesla produced 76 thousand cars versus Ford’s 6.7 million and saw revenues of $7 billion versus Ford’s $152 billion.

In the Next 100 Years presentation, the BMW Group made it clear they were staying well ahead of the curve, building on their accomplishment of how quickly they brought the electric i3 and i8 cars to market. But that was not the most interesting part of the Next 100 Years vision, which projected a future of intelligent assistants, augmented and autonomous driving, and novel solutions to mobility that reframe the notion of car ownership. The most interesting part of the Next 100 Years vision was that the innovations the BMW Group forecast were all powered by software, as underscored by an announcement from the BMW Group’s CEO that said in the future the BMW Group expected more than half its staff to be software developers.

I have witnessed similar inflection points at most of the Fortune 500 companies that I visit, regardless of the market segment they are in. Is every industry going to be disrupted in this way, where more than half the staff in years ahead are going to be IT professionals? Given Gene’s "2 percent of the way there" comment, are all of these enterprise organizations prepared for that shift, from a company organization and management point of view? Did the BMW Group have some fundamental advantage, having mastered the last great technological revolution? What could we learn from the way this plant operated, and could we apply it to the way large-scale software is built?

No Sector Is Safe

Over the past two decades, the first companies exposed to the shift to digital communication and collaboration, such as Kodak and Blockbuster, were some of the first victims of disruption. The difference now is that the entire economy is exposed to disruption.

Consider the four economic sectors as laid out by Zoltan Kenessey. The primary sector involves resource extraction from the planet, the secondary involves processing and manufacturing, the tertiary involves services, and the quaternary involves knowledge work.

The ability to improve discovery, extraction, and logistics through software gives some companies in the primary sector fundamental advantages over those who have not mastered these software-based solutions. While advances in extraction and technologies yield only incremental gains, software and IT systems can drive more trans-formational discoveries and efficiencies. For example, natural resource and energy companies are increasingly competing with software and data-driven approaches to discovery and extraction. The bottom line is that no business or sector is safe from digital disruption, even though the pace of the disruption will vary across sectors and businesses.

As we move out of the primary sector into the secondary, the shifts resulting from the Age of Software become more dramatic. Mass-manufactured goods, such as cars, have become commodities whose differentiation increasingly comes from a digital experience. Cars are now computers on wheels. Whereas your laptop’s Microsoft Windows operating system may have sixty million lines of code, in 2010 cars already contained around one hundred million.  For many automotive manufacturers, that makes the unit cost of the software in the car more expensive than the engine. This is only the start of the disruption. Autonomous drive systems will multiply the amount of software in the car and electrification of the engine is turning the rest of its core components into software systems as well.

Bosch, one of the companies that embody the Age of Mass Production, announced in 2017 that it was hiring 20,000 specialists for its digital transformation, with nearly half of the jobs related to software. Our physical products increasingly rely on a connected experience, and, factories, manufacturers, and assembly processes themselves are being transformed by software.

The digital disruptions and displacements we are witnessing in the tertiary sector (services) are spectacular. The software side of this story begins in 1997 with the transformation Netflix brought to the movie rental business. In those days, internet bandwidth was too scarce to deliver digital movies to the home. Inspired by computer scientist Andrew S. Tanenbaum’s famous math problem, which asked students to figure out the bandwidth of a station wagon carrying tapes across the US, Reed Hastings (co-founder and CEO of Netflix) determined that software could be applied to the selection and logistical distribution of DVDs. Not long after, venture capitalist Marc Andreessen described FedEx as "a software network that happens to have trucks, planes, and distribution hubs attached" in his seminal essay "Why Software is Eating the World." What Netflix and FedEx realized is that software can yield exponential gains in logistics.

Even so, we are still at the early stages of disruption in retail and logistics. Amazon is now able to combine supply-chain data with both logistics and consumer spending habits, which could disrupt storefronts themselves. Just as Walmart disrupted other retailers by mastering the methods of the Age of Mass Production, Amazon is now doing the same to Walmart and other retailers by disrupting the supply chain and seeing a nearly identical market-share growth profile. What’s clear from these trends is that the companies that achieved even a small and early edge on applying software to consumer experiences and logistics have won a seemingly insurmountable edge over the rest of the industry.

Finally, the quaternary sector -- composed of knowledge-work industries such as technology, media, education, and government -- moves at an even faster rate of digital change by virtue of being the newest and most malleable sector, in terms of how software can affect distribution and infrastructure. For example, we have already seen multiple waves of collaboration technology within the Age of Software, ranging from email to instant messaging to teleconferencing and digital assistants. Whatever the sector, we now have enough data points from the disruptions to make the trend clear. It’s happening in every sector, and the pace appears to be increasing. Companies that have harnessed software innovation are the winners, leaving those who fall behind to decline or get "Blockbustered." 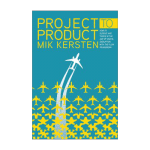 Dr. Mik Kersten is the CEO of Tasktop and author of Project to Product: How to Survive and Thrive in the Age of Digital Disruption with the Flow Framework. For more information, please visit, http://www.tasktop.com/mik-kersten.