I’ve already written one prediction about autonomous cars -- that they’ll be far later to the market than most pundits and autonomous car inventors are suggesting. Today’s prediction is about a tangentially-related technology -- aerial delivery drones. These drones are definitely coming just as fast as regulators will allow them, but I don’t think they’ll be implemented in the way people expect. What we’ll see, I predict, is something I call Pizza-to-the-Neighborhood or PTTN.

Aerial drones are a new type of distribution network operating in a new kind of ether. They don’t travel on roads and neither do they travel in what we conventionally think of as airspace. Flying over cities, which is where these delivery drones are going to be used, airplanes are legally restricted from operating below 1000 feet unless they are actively taking-off or landing. Helicopters get to break this rule a bit because they can claim to be taking-off or landing almost anywhere, but fixed-wing aircraft have to stay above 1000 feet, making below 1000 feet the emerging realm of autonomous drones.

At this very moment, what I am about to describe can’t legally exist in most of the USA. The current drone rules from the Federal Aviation Administration, which is the sole agency that regulates air traffic (your state or city have no real say in these things -- it’s a federal jurisdiction) are that drones have to be flown by licensed pilots. But already the concept of licensing is in flux when it comes to drone pilots. We’re moving quickly toward something less than a U.S. Commercial or Private Pilot License to more of a drone pilot certificate. And as soon as autonomous systems can be shown to be as safe or safer than human pilots, they’ll take over most drone piloting duties.

What’s still missing from this vision, however, is a drone network that makes economic sense. Yes, there’s plenty of dot-com inspired if we build it they will come, but there’s also plenty of experience to suggest that what we’ll get won’t be a drone utopia, either. For drones to work in the longer run they have to make money or allow someone else to make money. They have to pay their way.

We’ve seen this before in earlier distribution networks for electricity, natural gas, telephone, cable TV, and Internet service. Shortly it will be time to apply the lessons learned from those roll-outs to the new drone networks.

There are fundamentally two different types of distribution networks -- those that deliver commodity services and those that deliver personalized services. A commodity network is electricity, natural gas, water or -- in the reverse direction -- sewer service. The methane molecules or electrons delivered to your home aren’t marked with your address. They are just stuffed in a pipe at the head end and other molecules or electrons come out of the pipe at your house. A modified version of a commodity network is a traditional cable TV (CATV) system where everyone gets to choose from the same menu of one-way services, just there is a filter at your house that doesn’t let you get HBO unless you paid extra for it.

Phone and Internet service is different because every electron delivered was intended solely for your house. They ought to have no value to anyone else, but a very high value to you.

Commodity networks have relatively simple designs involving pipes or wires, valves or switches, and usually a service meter of some kind along the way. Commodity networks typically offer only one way for stuff to reach you, because having more than one possible route could mean loops that actually make service slower if it works at all. So if there is an alternate route on a commodity network it is normally turned off by a switch or a valve and used only occasionally to get around construction or a network outage. 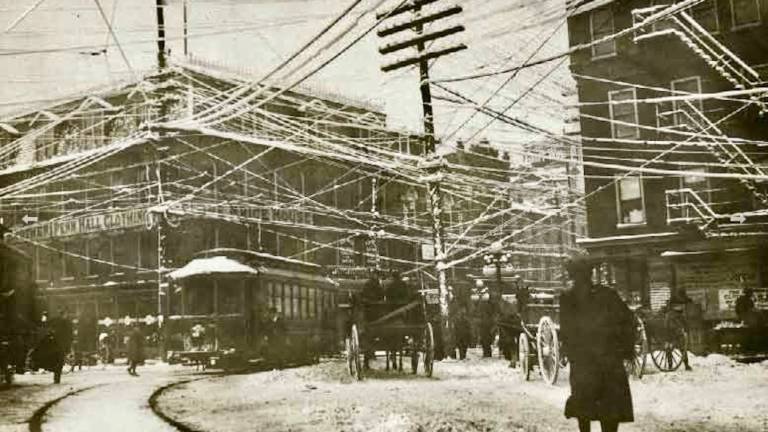 Phone networks originally had a very different way of getting around this looping problem. Here is a picture of telephone wires in New York City in 1887. Remember the telephone was invented in 1876 and phone service didn’t begin in New York until 1879 so this is what the phone network looked like when it was only eight years old. Every city was like this because most telephone connections were point-to-point. In most cases there was a physical wire connecting your phone directly to all the other phones you most often needed to reach. It’s pretty clear that such point-to-point networks couldn’t scale and that some form of switching -- in this case involving human telephone operators — had to be added if everyone was going to get a phone.

For telephone networks, scaling was made possible by first adding human switches and later by making those switches electro-mechanical (eliminating most human operators) when our telephones got dials. Remember telephone dials?

As digital computer networks emerged in the 1960s, institutions connected at will with the ARPAnet and similar commercial networks like Tymshare but there was the same problem of inadvertent structural loops causing what came to be known as packet storms that could bring the whole network crashing-down. But digital nodes were smart from the very beginning so Spanning Tree Protocols could find such physical loops and functionally shut them down through modified routing tables. This allowed us to have backbone networks where architecture was less a factor than monitoring and managing whatever it was we had to work with.

Now the economic challenge of for-profit computer networks was bringing-down costs so everyone could afford to participate. This was done in two ways. Early network providers like Compuserve and The Source were true digital utilities, providing their customers with expensive retail services created specifically to be sold. The Internet changed this model to one where services were either provided for free by us to each other (analogous to telephone service where our conversations were the content) or by ad-supported businesses like Yahoo. The other way to bring down network costs was by finding the cheapest way to get the most bits-per-second from one end of the Internet to your house. Initially this involved leveraging the telephone and cable TV wire plants, but eventually we reached speed limits with those. Getting broadband speeds up in the megabits-per-second looked like it would require a whole new physical network, this time built with optical fibers.

That brought us to services like Verizon’s FiOS and Google Fiber, where smelly men would appear to dig trenches in your yard, drill holes in your walls, and pull fiber into your home. We called it Fiber-to-the-Home (FTTH) and it was the hot ticket in the early 2000s -- a hot ticket that for the most part is no longer available. FTTH was too darned expensive to install, which limited the size of the FTTH customer base and the potential profit of the network.

Verizon’s FiOS service still operates, but it peaked at five million users and new users have not been added since 2010. Google Fiber stopped adding customers in 2016 and presently has 453,000 users.

But people still wanted faster Internet service so we had to find cheaper ways to provide it, which meant eliminating smelly men, trenches, and drilling holes. We accomplished this through a modified network topology called Fiber-to-the-Neighborhood or FTTN. With FTTN the super-fast fiber links didn’t extend to every house but instead to a box in every neighborhood that could, in turn, reach all the homes using either the telephone or cable TV connections for that final mile.

FTTN was vastly cheaper than FTTH not only because it eliminated all that installation labor but because it allowed thousands of users to share a single fiber loop. Even if we’re watching 4K Netflix movies, most of the time the service to our homes is actually running far below capacity. I pay Comcast for 300 megabits-per-second yet rarely use at any moment more than a tenth of that speed. Build a little resilience into the network and/or the service and most of us can operate using just one percent of our rated capacity without even feeling it. That means 100 homes in a neighborhood can effectively share a single gigabit connection, which is why Internet service is so cheap yet still big-time profitable for your ISP.

Yeah, but what does this have to do with drones?

We are about to have nearly the same experience with our impending drone networks.

Here’s the problem with Pizza-to-the-Home: where does the drone land at your house that won’t risk hitting a child, pet or vehicle and also won’t risk losing the delivery to theft or damage? We can’t economically mandate a drone landing tower for every house that’s above obstacles and with a guaranteed clear approach. This, too, would cost thousands of dollars per home, just like installing FiOS or Google Fiber.

But we CAN mandate such a landing platform on top of every pizza delivery vehicle. Using GPS, the drone and car can find each other with the drone landing only when the car is stopped and the approach is clear. So, like FTTN, the local delivery (the last mile) will use legacy technology (the pizza delivery driver) but for that driver each delivery will take five minutes or less.

Pizza is delivered faster and hotter and the driver, instead of making 2-3 deliveries per hour, can make 10-12.

This is what we’ll shortly see proposed for drone delivery, not just for pizza but for everything else. And because the actual drone flight will be between professional network nodes (if a 17 year-old pizza driver can be thought of as professional) the liability issues because much simpler.

Now here’s where Internet-style disintermediation comes into play. Such a drone delivery network still costs money to build but that money will be instantly available if the class of goods that can be delivered expands beyond food to anything weighing under, say, 10 pounds. This means prescription drugs and even Amazon Prime or walmart.com packages can arrive on the same car, delivered to that car by multiple drones and drone networks.

All it requires is WAAS GPS and a standardized car rooftop landing platform, which I am sure we will shortly see.