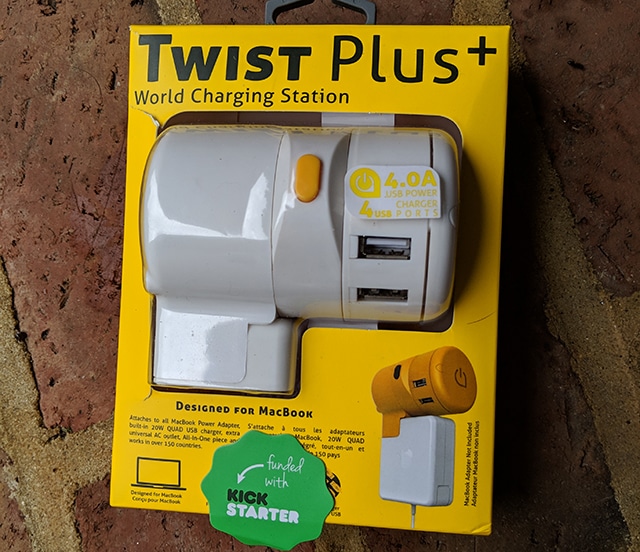 One thing we have not yet left behind as a society is charging cords. There’s "wireless" charging and a few other interesting attempts, but for now we’re all mostly tied to a USB cable with some sort of plug on the other end -- Micro USB, USB-C, Lightning, etc.

That can become a serious problem in several situations. For instance, ever try to find a free plug in a busy airport? Well, we can’t help you there, but we do have a solution for another situation. That is foreign countries. It seems wherever you go the outlet is different.

Recently we got the opportunity to test an option that can perhaps help you out in your travels. It’s called the Twist Plus and it can convert to multiple outlet configurations around the world. Sure, it’s not the first multi country adapter, but it has perhaps the best design.

Twist Plus is designed for MacBooks, and attaches to the MacBook Power Adapter, but you can use it to charge all of your other devices too. The official literature claims it works in over 150 countries and fits outlet styles in the US, Canada, Japan, UK, Hong Kong, Singapore, Australia, China and Europe. You simply press a button and turn a cylinder in the center of the device. With each click a different type of plug emerges from the end.

The build quality is excellent and spanning the round shape of the adapter are four standard USB outlets to plug your charge cords into. One drawback is that there is no USB-C, but cords with that at both ends aren’t that common at the moment, so this isn’t a deal breaker. After getting past the slick design of the product we get to the real question, the one that matters. Does it work? The answer is yes. The center of the cylinder spins easily and clicks into place with various plugs protruding from it. One thing to note is that while claiming four plugs, only three pop out. There is only a subtle difference between US/Canada/Japan and Australia/China. You will need to pop out the US one and physically turn the two prongs to an angle to adapt for the land down under.

Does it charge your devices? Yes on that one as well. A confession that the first device I tried it with was an older, expendable one -- you can’t be too careful -- but it was fine. If you're a MacBook user and travel a lot, then you should definitely throw Twist Plus in your bag.

The Twist Plus World Charging Station (the model we tested) will be available soon from OneAdaptr. Price is not yet known, but existing models, which are slightly different, run in the $40 range.