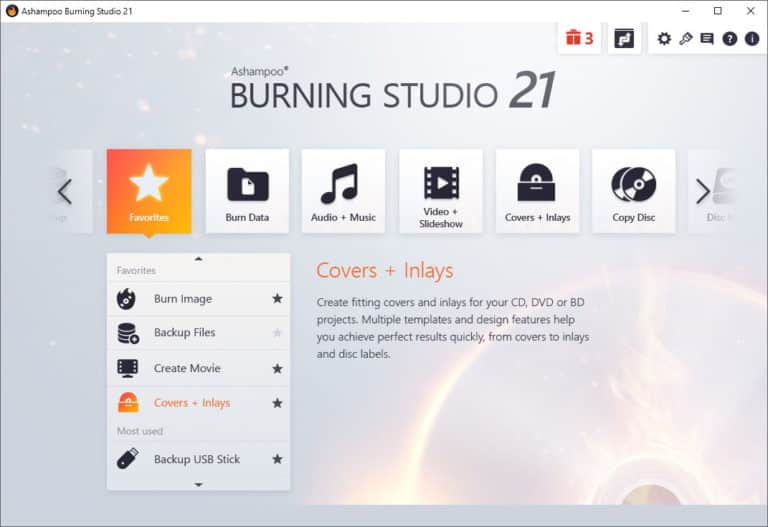 Capable of burning all types of optical disc from CD to Blu-ray, and supporting data, audio and video projects, version 21 unveils a major new user interface designed to aid navigation, plus expands its multimedia capabilities.

The redesigned user interface provides the focus for much of Burning Studio’s improvements. It’s been designed to improve navigation, from the carousel-based menu system to a new home button allowing users to jump back to the main screen from anywhere in the program.

There’s a new favorites section, which combines frequently accessed components with user-selected favorites to provide fast access to the remotest corners of the program. For those who prefer the old menu-based system, this remains available, just a single click away.

Other new features include the ability to rotate videos easily and burn better-quality video slideshows thanks to improvements to the image optimization engine. New tailor-made profiles for specific car radios, CD changers and mobile storage media have also been added to the music burning component.

The data burning engine sees improved support for automatic disc spanning, providing an unlimited storage capacity if you have the discs. It’s also improved its detection of blank discs and the ability to extract file-based images from CDs, DVDs and Blu-rays. The smart backup scheduling plan has also been tweaked to improve the reliability of data backups.

Ashampoo Burning Studio 21.2.0 is available now as a free trial download for PCs running Windows 7 or later. The full version retails for $49.99, but is currently on-sale for just $25.