Apple is poised to dominate the media landscape -- here's why

There have been a lot of "media moves" in the mobile world recently, including the launch of Facebook News, Samsung’s "rebrand" of Bixby Home to Samsung Daily and more that demonstrate the battle for consumer attention on mobile devices is quickly heating up.

But Apple’s moves in both hardware, software, and media put them far ahead in making frictionless, seamless, and integrated media experiences. Apple’s hardware and software (already in the hands of millions) extends from the watch and the phone to the tablet and TV enabling cross-device media integrations (e.g., recommendations, control, etc.) that will transform the media landscape. Additionally, Apple already owns or has partnerships with streaming video, news publishers, game makers, and more, giving them the power, scale, and reach to dominate media.

Apple is a master at driving media success by delivering a frictionless content experience. Look at Apple News. It comes preinstalled on the iPhone and seamlessly integrates with every feature of the device. Users are delivered personalized content on the "minus-one" screen of their phone -- just one swipe from the home screen. In an era where one could easily become overwhelmed by the vast number of content options, Apple has made it super easy to find what you want. Swipe left or ask Siri. It’s that simple.

The ease of it -- combined with the popularity of iPhones and other Apple devices -- takes the challenge out of driving reach. For many of us who swipe left to see the headlines, it makes it a no-brainer. Why bother opening an app or typing in a URL when all you have to do is swipe once? For me, it’s a habit. I wake up in the morning, grab my phone, and swipe left to see what’s going on in the world. It’s not even a conscious effort anymore -- it’s automatic. That "first touch" is the absolute key to driving reach.

Believe it or not, choice overload is a real thing, and Apple’s understanding of that is part of what’s powering their success. With so many content options, consumers face a sort of "analysis paralysis" that makes it harder, not easier, to decide what to read, watch, or listen to in those brief moments of downtime throughout their day. By surfacing curated, snackable content so seamlessly, Apple has easily solved a problem for consumers. Unlock your phone, and Siri/Apple News has content that it knows you’ll like right there, just waiting for you. It’s like the experience of shopping at Trader Joe’s versus Walmart: the choice has been made for you, and it’s probably higher quality and more enjoyable than what you’d select on your own.

Right now, Apple News (and Apple’s impact on media overall) is in its infancy, but don’t expect it to stay there: it will evolve and improve, just like Siri has. Here’s a potential future scenario: Today, if you unlock your phone, you’ll see suggested apps at the top of the minus-one screen. In the future, you’ll find a home screen that’s effectively a Siri-powered Apple News experience alongside Siri-powered app suggestions. I predict that if you look at your phone first thing in the morning -- hours after your last check-in on Facebook -- you’ll be greeted by Siri-powered Apple News to kick-start your day with a zero-touch, curated Apple News update alongside a one-touch path back to Facebook. That’s a subtle change, but it may have a significant negative impact on Facebook consumption. Verto Analytics found that as much as 18 percent of Facebook’s usage comes from users who simply left the app open after their last visit.

This enhanced experience on the minus-one screen will almost certainly carry over to your Apple TV and other devices. Moving forward, the screen will move beyond Apple News and be filled with even more personalized content, including deals, games, offers, events, and Apple TV integration.

Apple’s understanding of your media habits across devices allows them to do cross-device, cross-media recommendations. For example, it’s easy to imagine Siri giving you Apple TV suggestions based on what you are reading on Apple News. Additionally, the integration can extend beyond recommendations and also allow cross-device control. Imagine seeing a suggestion, just swiping it toward your Apple TV, and having that suggestion added to your watch list -- immediately played or AirDropped to your most recently iCloud-messaged contacts. This frictionless, ease of use could make Apple recommendations the default media choice for us in a world saturated with choices.

Eventually, the media choices you make during the 100 or so times you’ve picked up your mobile device during the day will be ingrained and integrated into the Apple ecosystem, making it simple to carry onto your other screens. Apple will almost certainly create a consistent, personalized cross-screen experience.

So, to the original point, who will be able to compete with this experience? Facebook with Portal? They certainly have the data and content, but if their last foray into hardware is any indication, I wouldn’t lose sleep over this competitor. Samsung may have a better chance, particularly if they can work with carriers for a more personalized experience. Great devices, media choices, and integrated tech are the keys, however. While Samsung has great hardware and can create partnerships through its relationship with Google, it remains to be seen if they can put it all together like Apple has begun doing.

The only other potential competitors, at least here in the U.S., are wireless carriers -- with their reach into devices, cable, and media properties. The question for them will be whether they can catch up on the innovation front -- or if Apple already has too much of a head start in that area at this stage of the game. 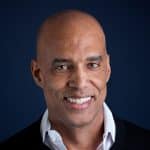