Microsoft-related news over the last few days has been all about Windows 7 reaching end-of-life, but today marks the day that the company starts to push the Chromium-based version of Edge to Windows 10 users after beta testing. For businesses and organizations that do not feel ready to make the transition just yet, there is no need to panic.

Microsoft says there are no plans to push the browser to commercial or enterprise devices, and there's a Blocker Toolkit available to disable automatic delivery of Chromium-based Microsoft Edge, anyway. But for Home and Pro users, there is likely to be disappointment for anyone hoping that the rollout of the stable version of the browser would mean it was feature complete. There are in fact several things missing.

Microsoft's embracing of, and subsequent shift to, the Chromium engine has been widely welcomed as a step in the right direction. But while the new version of Edge has been far better received than the original, issues remain, even after a lengthy period of beta testing.

For a long time, the number of extensions available for Edge was small as you were limited to using the virtually empty Microsoft Web Store. Now, however, it is possible to use the Chrome Web Store, complete with a much wider library of extensions to bring new capabilities and options to the browser.

However, there are issues with some extensions under Chromium-based Edge:

There are also issues relating to synchronization, which many people may find to be a deal-breaker. While Favorites, Settings, Passwords and Addresses sync, there's plenty that doesn't. Take a look in Sync Settings and for History, Open Tabs, Extensions and Collections, and there's the cheery message: "Coming soon! We'll turn it on as soon as it's ready" 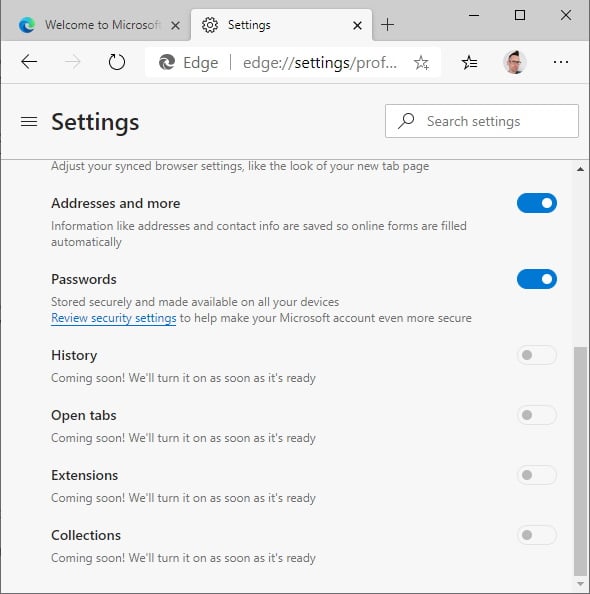 Microsoft has listed this in the Known Issues for the beta version of browser for a while now:

Even when these issues are sorted, Chromium-based Edge faces a steep uphill battle to catch up with the likes of Chrome, Firefox and Opera which have taken advantage of the poor reputation Microsoft's browsers developed -- and never really managed to shake off -- thanks largely to Internet Explorer, but also the initial versions of Edge.

It's also worthy noting -- as Mary Jo Foley does -- that Microsoft has stripped out numerous Chromium services... which could be seen as both a good and a bad thing.

If you're interested in using the Blocker Toolkit to avoid Chromium-based Edge, you can find out more here.

Conversely, if you want to download the stable version of the Chromium-based version of Edge, you can grab it here.

33 Responses to Microsoft is rolling out Chromium-based Edge to everyone from today, but it's missing important features