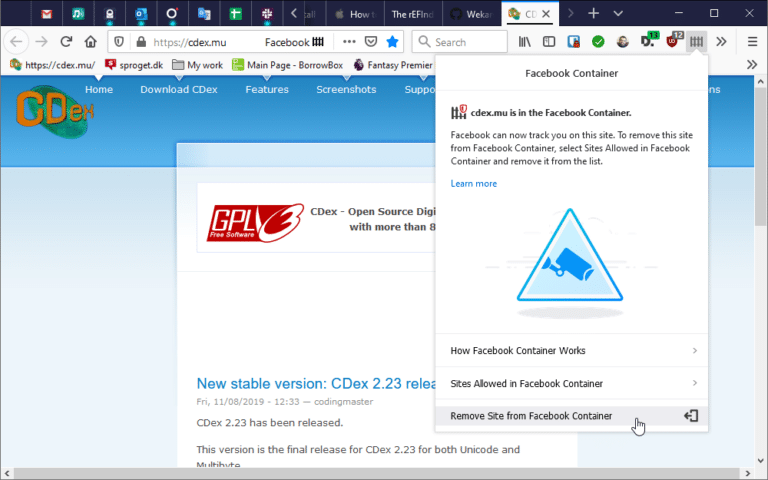 Firefox 74.0 ships with several new features, none of which are jaw-dropping, but all of which serve to further improve the browser’s privacy, security and usability. In addition, the Facebook Container add-on now gives users control over which sites are blocked from reporting back to Facebook.

One major security improvement is that applications can no longer silently install add-ons -- they can only be installed by users. At the same time, add-ons installed by external apps can now be removed via the Add-Ons Manager (about:addons).

Importing bookmarks and history from the new Chromium-based Microsoft Edge browser has been made simpler in Firefox 74, while users are now able to reverse alpha-sort (Z-A) stored passwords in the Lockwise password-management tool.

Another privacy improvement sees user IP addresses masked in certain WebRTC web voice and video chats through the addition of support for mDNS ICE. Firefox 74 also disables support for the obsolete TLS 1.0 and 1.1 cryptographic protocols to improve security when connecting to web sites.

Changes include a repositioned picture-in-picture button for videos when uploading content to Instagram -- previously it appeared above the next button. Windows users will also find that pressing Ctrl + I now opens the Page Info window instead of serving as an additional shortcut for the Bookmarks sidebar (still accessible via Ctrl + B).

Once again, the lack of major new features can be explained by Firefox’s shift from a six-weekly to four-weekly cycle, which debuted with the release of Firefox 73. This contained just two minor new features of note: a new global default zoom setting and improved readability in High Contrast Mode.

Meanwhile, the first beta for Firefox 75.0 has been released. It comes with the promise of improved HTTPS compatibility with misconfigured web servers plus an added requirement to provide OS authentication when accessing passwords via about:logins if no master password has been set.

Firefox 74.0 and Firefox ESR 68.6.0 are available now as free, open-source downloads for supported versions of Windows, Mac and Linux. Also released is Firefox for Android 68.6.0 -- its eventual successor, Firefox Preview 3.2.1, is close to being transferred across to the Firefox for Android Beta channel and is slated to replace the original app in the second quarter of this year.