Here's how to watch Netflix, Hulu, Disney+, HBO Now and more for free 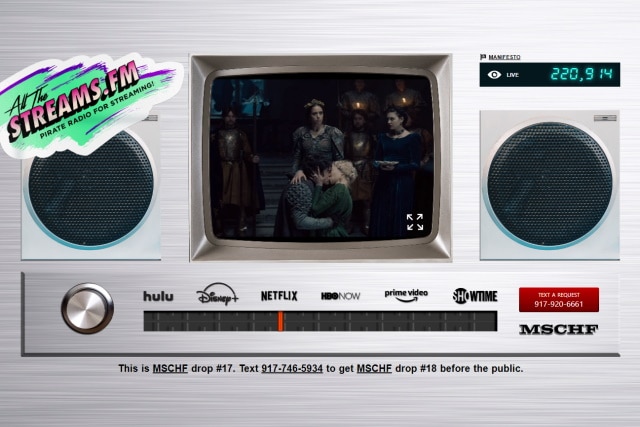 There are a huge number of streaming video services available these days. Netflix is the undoubted leader of the pack, but the likes of Hulu, Disney+ and Amazon Prime Video are also vying for your attention... and subscription fee.

Paying for numerous streaming services can quickly add up, but a site that bills itself as "pirate radio for streaming" has something of a solution. It lets you watch Hulu, Disney+, Netflix, HBO Now, Amazon Prime Video and Showtime for free. But how long will it last?

If this all sounds appealing, AllTheStreams.fm could be the site for you. The site is the brainchild of the notorious MSCHF, which seems to have little concern about the legality of the service it is offering.

We've already mentioned the six streaming services the site gives you access to, but this is not quite the same as having a regular paid-for subscription. You don't get to browse through a list of shows and movies to choose what you want to watch, you just get to see whatever MSCHF has selected in each case. Think of it as a streaming service with six channels to choose from, but no program guide.

The site has published a manifesto that sets out some of what it stands for, and goes some way to explaining why it exists:

Netflix has all the Netflix stuff, Disney has all the Disney stuff, and never the twain shall meet. Let's change that, however briefly.

Whenever media becomes inaccessible, piracy thrives again -- from the 1960's BBC 1-hour limit on pop music, to the iTunes store mp3 tyranny of the 00s. Today, All The Streams comes in response to the fragmentation and walled-garden paradigm that has risen to prominence for online video streaming services.

At a time where "up next" tends to be hot algorithmic garbage, pirate radio offers up the idiosyncracy of human decision across an unrestricted breadth of choice. We're going to play anything and everything we feel like. We're going to make a frankensteinian playlist of media that none of these streaming platforms could ever recommend to you because it would cost them the profits of their exclusively-owned content. Sit back and enjoy the ride: like all pirate media offerings, we're doing this for you.

This is likely to be a case of "grab it while you can"; it's hard to imagine that AllTheStreams.fm will stick around for all that long. Unless, of course, it goes down the route of The Pirate Bay and bounces around the world avoiding legal intervention...

8 Responses to Here's how to watch Netflix, Hulu, Disney+, HBO Now and more for free